Choose the element of ‘Lighting – Burners’ above to link directly to that page after reading the introduction below.

The development of the gas burner is the very first step in the practical use of gas. Before the burner, gas released from any natural source occasionally caught fire – perhaps from a spark or lightning. These natural “fire wells” as they were known could often burn for a very long time and there is a well known picture of Thomas Shirley musing over one of these ‘fire wells’ back in 1659. This is of course ‘natural gas’ formed by the action of rotting vegetation and which, many years later, would result in the revolution of the Gas Industry as it converted from ‘Town Gas’ manufactured from coal to ‘Natural Gas’ brought up from below the north sea. The story goes that the Chinese used the gas from these fire wells, collected in an animal bladder, as a means of mobile lighting, by piercing holes through which the gas escaped and could be lit. The first ‘burner’? 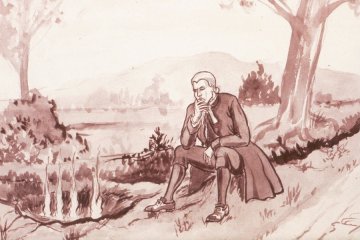 Thomas Shirley Musing over a natural ‘fire well’ in 1659

150 years after Thomas Shirley, the small amounts of gas then manufactured from coal were simply burned through a hole or series of holes in a pipe.

This type of burner, developed steadily for both interior fixtures and street lighting, is known generally as an ‘Open Flame‘ burner and included in this section are the many improvements and later developments of the open flame such as ‘Governor Burners’. Some demonstration sets that have come to light are also included here as are some details on the production of Steatite jets and other items made from this material.

The ‘Christiania and Argand‘ burners, are significant William Sugg developments of the open flame burner, long pre-dating the gas mantle.

‘Incandescent & Superheated‘ burners heralds the advent of the gas mantle – a development that changed the whole lighting industry.

‘Burner Clockwork Time Controllers’ provides an introduction to the means of switching and lighting the gas burners automatically to finally replace the ‘lamplighter’. 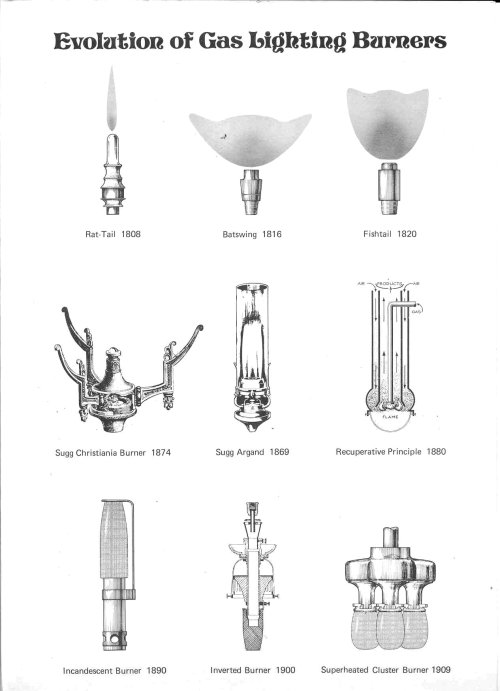 The trays below show a collection of burners and some other items presented to The Museum of London by The Company about the time of the takeover. They were last seen and photographed by CS around 1980. 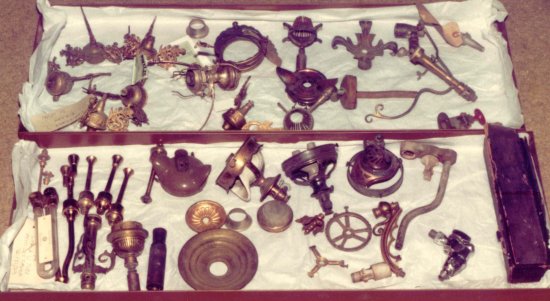 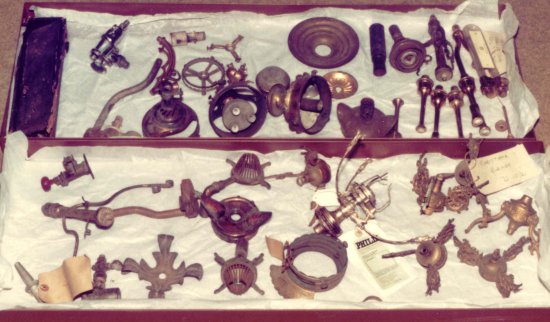 Stuart Hall who was brought up in Dartford, Kent, was given the hand bill below many years ago. As you can see it goes right back to the 1840’s and has the scale of charges for Argand, Batswing, Fish Tail, Single Jet or Pipe Light. Indeed it shows that a 12 hole Argand is charged at the same rate as a Batswing. These charges are for the use of these burners annually. It says at 5 that the Service Pipe will be laid, the internal fittings done, and meters supplied at the expence sic of the consumer, under the direction of the Company’s manager. It is not clear if the consumer has to pay for the actual fixtures themselves. The charge for gas taken by meter is not given although there is a space to fill in the figure.
As you can see the gas company realised how easily a customer could take more gas than they had agreed to and stated that upon a breach of any of their regulations may without notice discontinue the supply of gas and compel the party to make good the damage or loss. 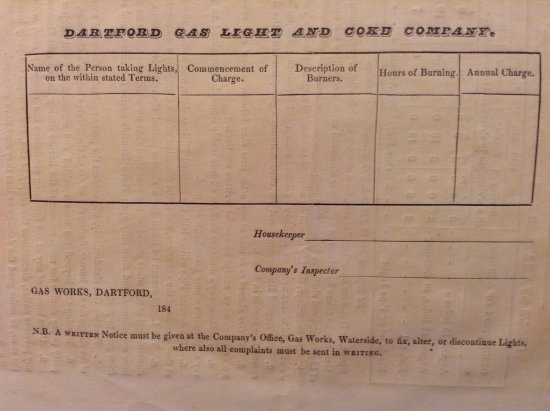 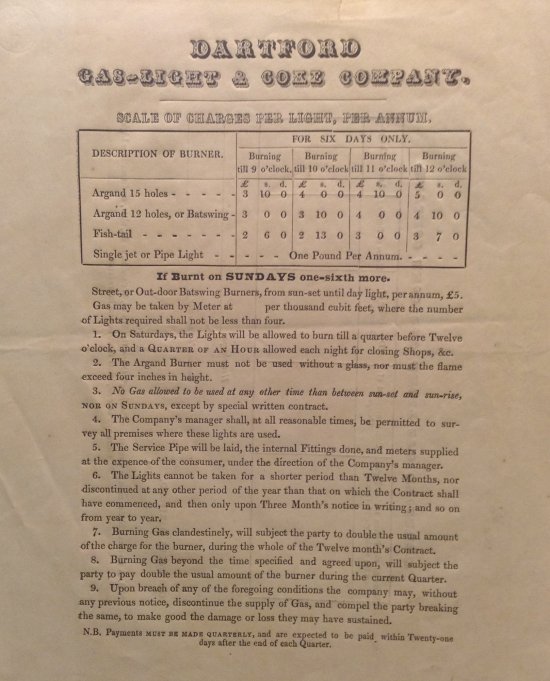