(This is an element of ‘Lighting – Burners & Controls‘)

As discussed under ‘open flame burners’ and also ‘large lanterns’, the growth in demand for increased lighting performance was unstoppable.  The burners and the lanterns had become truly enormous.  To some it was almost as if pure lighting power had become the goal as opposed to providing a sufficient or suitable amount of light for any particular street or location!  The electricians were beginning to make inroads with their ‘arc’ lamps.  Every time a road was lit by electricity the gas companies would install a string of high performance gas lights to effectively eclipse the competition.

William Sugg had produced the ultimate in multi concentric ring Argand burners and lamps providing up to 400 candle power as well as multiple flat flame burners which were quite capable of competing and beating anything the electricians could produce – and this was several years before the advent of the gas mantle.

The timely invention of the incandescent gas mantle, however, completely revolutionised the whole of the gas lighting world.  At a stroke it was possible to obtain lighting performances consuming a quarter of the amount of gas previously required with the consequent reduction in heat.  –  Not that it was an easy step.

William Sugg was the first company in the UK to obtain a licence to manufacture the gas mantle.  It did not last for long as William found that Welsbach did not provide any information as to how the process should be achieved.  William, in his own inimitable style, set up a small plant in his home to discover the best way of manufacturing the product and then transferred this to the factory.  However, the nature of the early mantles was such that they were attached directly to and sold complete with the burner.  Unbelievably fragile, many purchasers would find their mantle was broken before they reached home!  To achieve any replacement the burner had to be returned to the factory.

These pictures illustrate a box of the early Veritas upright gas mantles untouched after as much as 90 years, which proves perhaps that, although still fragile, the mantle achieved a level of strength suited to the task for a century!

When Stuart Hall saw the picture above he sent me the picture below of his version of the same mantle in a red box. As you can see the red version is XX Extra Quality against the green XXX Quality. It’s not really obvious which one is the higher quality! Stuart purchased the remaining stock – 3 dozen, in the Old Kent road, possibly at Falk Stadelmann’s, prior to 1972. He told me that he used a couple about 40 years ago (mid 70’s) for a late Victorian table lamp! Stuart was brought up in Dartford, Kent and sent me a document given to new customers in the 1840’s giving the scale of charges for different burners many years before the mantle. This has been added to ‘burners – introduction‘

Because the open flame jet pointed upwards, the first mantles were developed to work in the same way, which is why they are called “upright” mantles.  The glass tops of the early box lanterns progressively became obscured, firstly with opal glass and eventually with metal tops providing a reflecting surface to drive the light down to the road where it was really needed.  The glass tops had been useful when the only lighting was from the street and some of the light would penetrate into the bedrooms of the houses immediately beside the road.

This is one of at least two devices that used a flat piece of mantle fabric mounted in a small frame attached or clipped onto an open flame burner. In the ‘Discon’ – doubtless named after the ‘disc’ of mantle fabric – it was sold as a complete burner assembly that could simply be screwed in place of a normal open flame jet. As you can see it even had a mica sleeve. This is quite a sophisticated arrangement compared to the other that I believe was called ‘Magna’. In this ‘mantle’ the piece of fabric was mounted in a small brass square frame with a  clip attached that allowed it to be simply clipped onto a conventional open flame jet. (If anyone has a photo of this device I would like to add it. The last one I saw was in the London Gas Museum (now extinct) and I have not been able to find the photo – so far!)

The following three instructions were provided with the Discon burner. CLICK on image and then click again on the cross top right to enlarge either to make them readable.

As with so many developments, a step such as inverting the mantle so that it points downwards in the direction that the light is actually required, looks so obvious that one wonders why it took some time to reach this stage.  Early literature on the Windsor lantern shows that the upright mantle was the first light source offered in this lantern designed in 1898 so the general introduction of the inverted mantle was not until the 20th century.

Several of these unused early Veritas ‘Shell’ burners in their original boxes were stored along with the upright mantles shown above by a man who lived in a gaslit house in Tunbridge Wells and was determined to hold enough spares for life!

The pictures above and below show from left to right, a No.4, a No.3 also called ‘Universal’, a No.2 and a No.1 or ‘Bijou’ mantle. Finally, on the right is the tiny ‘Limina’ mantle designed for small warning lights.

Mantle boxes are also collected for their interesting variety. The Veritas box on the left was the final offering before they stopped manufacture but, as you can see, the red and green colours were previously used to indicate a ‘quality’ level.

The two sides of this green Veritas box have probably their best known adverts of all time!

The rather poor picture above shows the ‘Truma’ mantle with an internally threaded ring manufactured to fit on a matching threaded nozzle to comply with regulations for Australia. This arrangement ensures that all the products of combustion pass through the fabric rather than between the ring and nozzle as with the ‘normal’ 3 – lug hanging arrangement.
Below shows you the internal thread on the mantle ring. 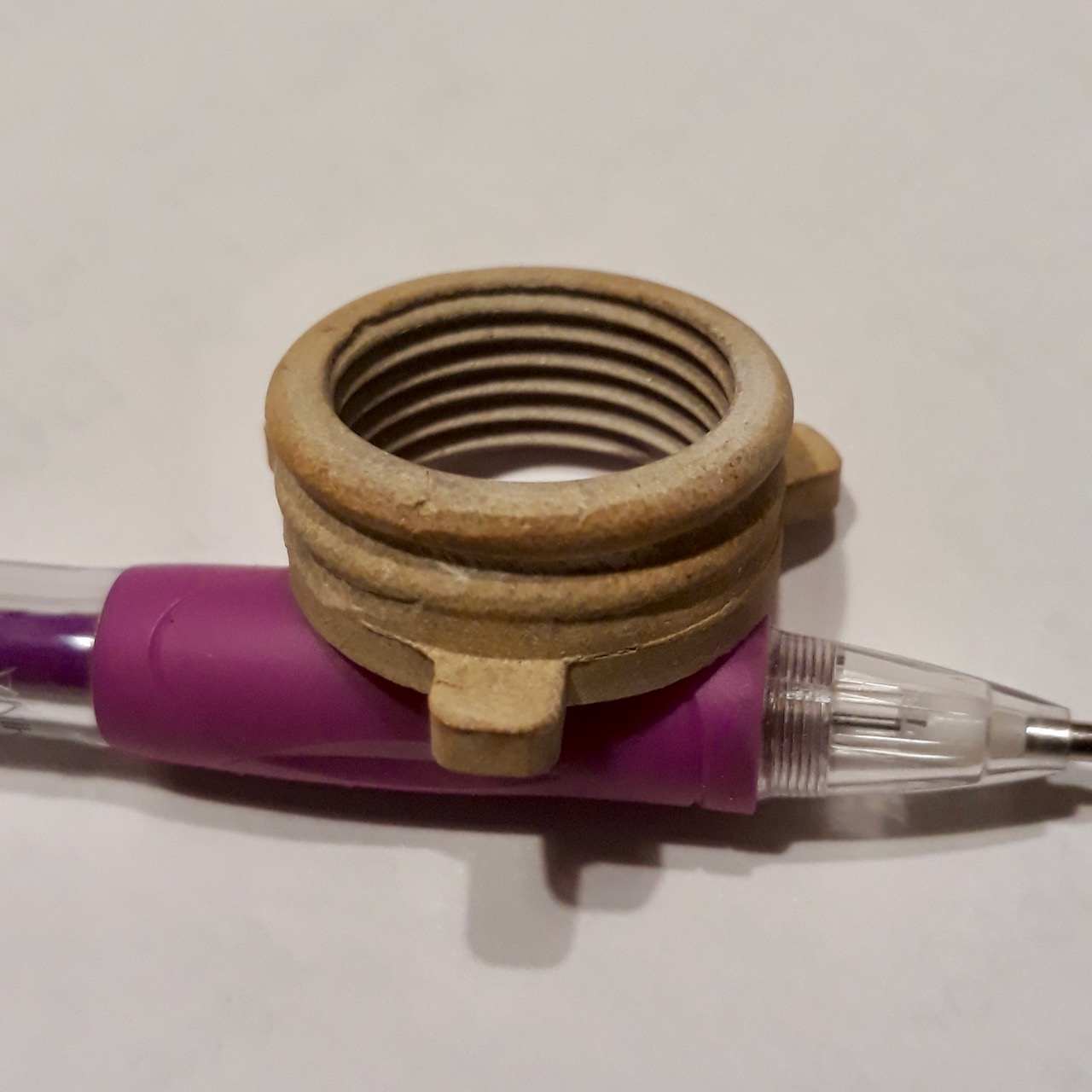 As mentioned in the comparison picture above, this is the ‘Limina’ mantle that was manufactured for very small signal lamp applications such as the one below from Hyde Park many years ago. The plastic cap is simply for protection during transport and storage.

This replaced the earlier super fragile one amid much sales hype as can be seen on this box label indicating that they could be seen from Mars!

The inverted mantle is roughly hemispherical in shape at the bottom with parallel sides which are attached to a ceramic ring that fits to a matching nozzle. The aim is to fill the mantle with a hot flame that causes the mantle fabric to incandesce brightly. Over the years the mantle has changed in size along with the supporting nozzle.

In some ways, the development of the mantle mirrors that of the open flame.  In the attempt to obtain more light, mantles steadily increased in size as more gas was burnt.  The eventual discovery that preheating the gas prior to lighting it produced an increase in performance, allied to the improved strength of smaller mantles, finally led to the introduction of the cluster of small mantles mounted on what became known as a “superheater”, although more properly it acts as a pre-heater. The point had also been reached at which it was realised that the framework and base of the square and other box lantern shapes produced considerable shadowing.  The stage was set for the shadowless lantern. See ‘Rochester & Littleton‘ section.

These illustrations show burners used in traditional lanterns with bottom or side entry. ‘A’ is the common 2 lt superheated burner used as a conversion burner when upgrading lanterns from open flame or upright mantle.

Five different cast iron superheaters from 8 lt to 12 lt. The mantle arrangement in some superheaters allows for a ‘turn-down’ arrangement to reduce the illumination after midnight by a separate feed to certain of the ports.

By placing mantles in a row, this burner provides directional illumination in the same way as a tubular electric lamp.  The ‘London’ lamp uses a burner of this type and adds reflectors along the length of the burner to control the vertical spread.

Back to ‘Burners & Controls‘
or
Back to ‘Lighting‘