(This is an element of ‘Lighting‘) The one feature of all gas lamps, indeed of burning gas in any appliance, is the production of heat. In the days when houses were entirely lit by gas and especially with open flame burners, something like a third of the heating of the house came from the gas lights. In fact many users were very happy about this because the heating of houses was largely by coal fires and then by gas fires (see the Heating section). This meant that the temperature varied enormously throughout the house and without the gas lighting providing some heat elsewhere, the draughtiness would have been considerably worse. Having indicated an advantage of heat from the gas fixtures it is also a significant problem, especially in public buildings in which a large amount of gas would be burned to provide sufficient light. Refer to the Street Lighting section to see just how large the lamps became in order to survive the enormous heat of the burner. The answer, or at least a means of providing a solution to the problem was to connect the lamp to the outside air in the form of a chimney. This would then form a passage for the hot products of combustion and, by linking this to the hot air in the room the whole fixture became a means of ventilation, hence the name ventilating lamp. As lighting fixtures are always high up where the temperature is the highest they could perform exceedingly well in their guise as ventilators and, because in many cases in public buildings they are very large, a surprising number of these fixtures still exist and one or two are still in use! Of course, the Victorian designers revelled in producing fabulous designs for these imposing fixtures which would often be the focus of attention, for instance, in the ceiling of an equally decorative theatre . 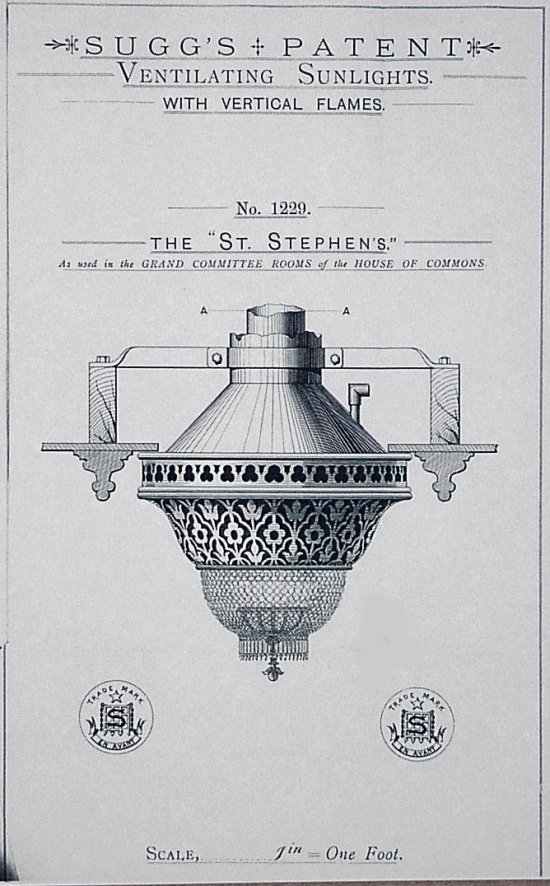 Ventilating Sunlight as used in the House of Commons 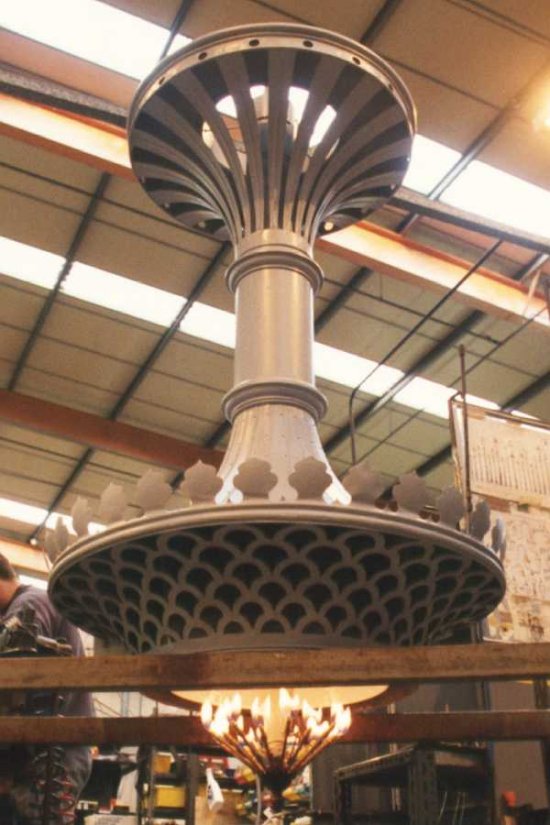 Original Sun Burner refurbished and fitted with electronic ignition in the Sugg Lighting factory prior to being installed in one of the buildings of the new Scottish Parliament. 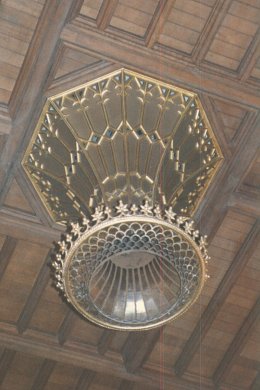 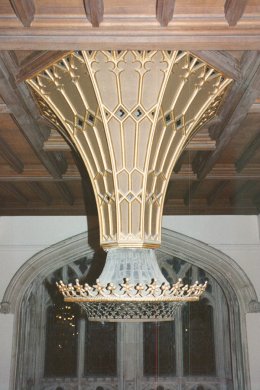 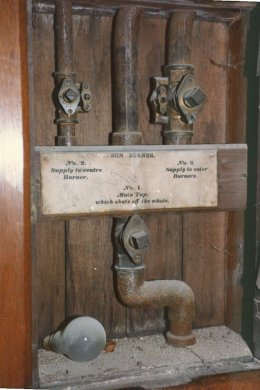 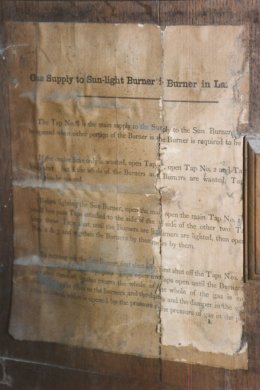 I took these pictures in the 1980’s of this magnificent Sun Light in a building near Redhill in Surrey. Not only does it clearly show the mica reflecting surface which surrounded the burner and allowed some light upwards but it appeared to be fully installed – apart from the burner – complete with a small cupboard with the controls and the instructions pasted to the inside of the door. The central tap has the legend “No.1 Main Tap which shuts off the whole.” On the left it says “No.2 Supply to centre burner.” On the right it says “No.3 Supply to outer burners.” You can see that taps 2 & 3 both have small parallel bypass taps which would allow a small amount of gas to pass even when the main tap is turned off. This would be set to keep the burner running at a very low level so that either the centre or outer burners could be turned on remotely without having to apply a light. I imagine that the main tap was turned off during the summer when the light was not used. The instructions are headed “Gas Supply to the Sun-Light Burner in Landing”. Unfortunately there was a printing error which nobody ever corrected so that the the text partially repeats and each sentence is not completed. It is possible, however, to interpret the lighting instructions although the last paragraph in talking about turning out the Sun Burner indicates that there is a damper which is opened by the pressure of the gas. It is, unfortunately, not clear as to where this damper is located but it could either be in the flue or possibly in the pipework to prevent an explosive gas-air mixture forming as the gas in the pipe leached out with the taps being a long way from the burner.. This problem was dealt with in other lighting equipment and is discussed under CCS controls. It specifically applied to the use of manufactured town gas. 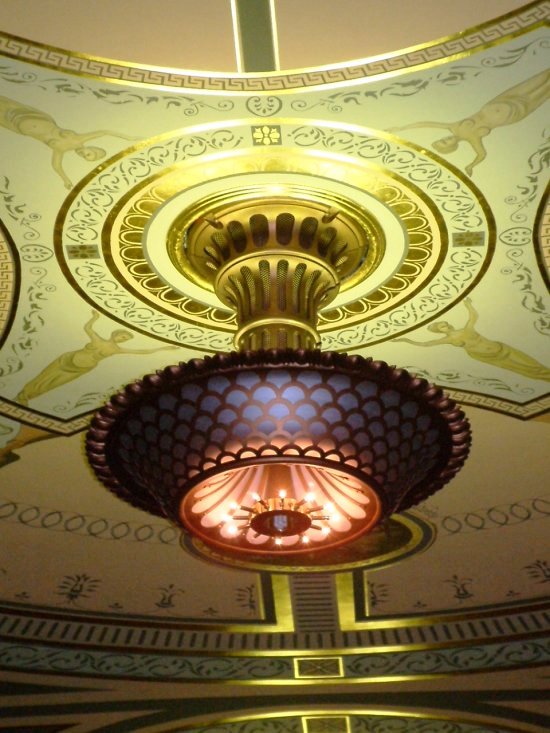 This magnificent Sun Burner can be seen by any visitor to the Victoria and Albert Museum in London, along with a whole row of identical fixtures at the right hand end of the first floor. Although not operating on gas they have been carefully electrified to show many features of this type of fixture. You can see the ventilation slots in the ceiling support where the hot air at the ceiling level is drawn in and up by the temperature of the central ‘flue’ heated by the gas flames. They have used the design of the fixture to hide some ‘uplighters’ which illuminate the superb ceiling – a feature that would not have existed originally.

Several of these pictures were sent to me in January 2010 by my old Sugg Lighting colleague, Melvyn, who had been visiting the Birmingham Art Gallery – as he knows my interests – sad really! However they do show two classic sun burner installations which are still in their original state and position and can be seen by anyone in the area. The control panel indicates just how many fixtures were controlled from this central point and how the building was designed around the lighting. More recently in 2013 I was asked to advise on the safety of these ‘unused’ appliances and I have added two more pictures providing a close-up of the highest mounted fixture and a general view taken by installation, maintenance and gas consultant Chris Warren who was visiting to discuss the possibility of inspecting these amazing fixtures. 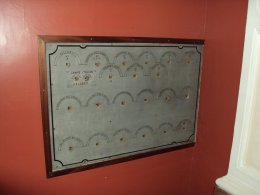 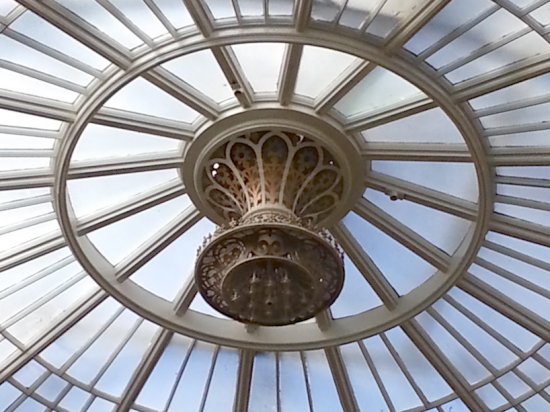 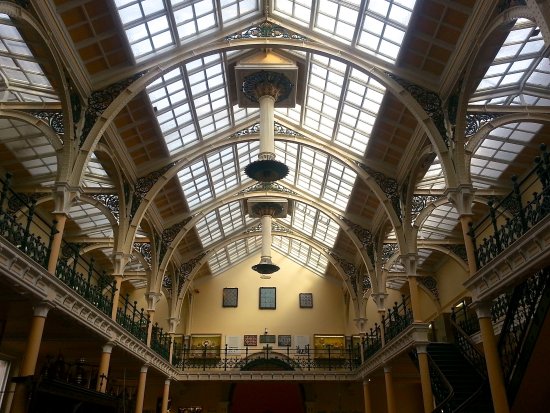 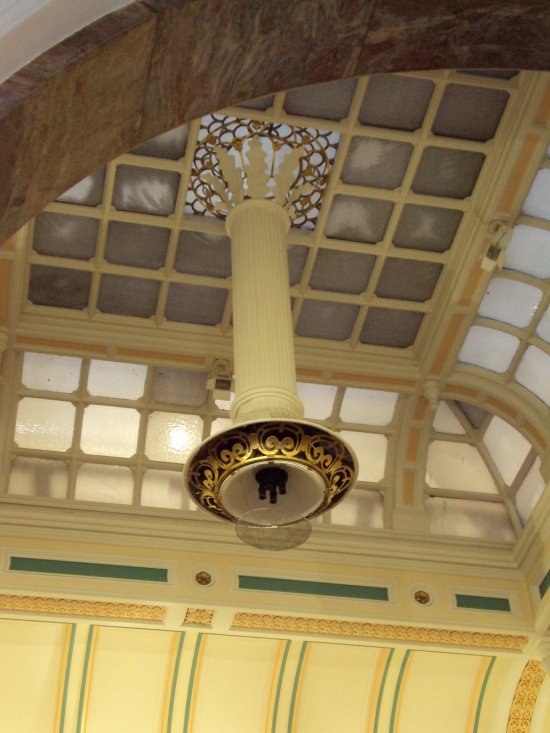 The Gaiety Theatre on The Isle of Man has this fantastic decorative glazed dome, below, with a 7 unit sunburner set in the centre. Converted to electricity by Sugg Lighting in the late years of the 20th Century it was part of a major refurbishment of the theatre. 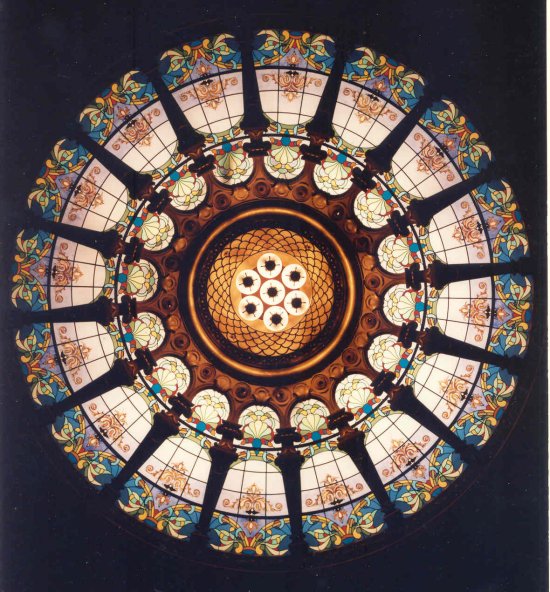 Ventilation as applied to problems other  than Sun Burners.

Although the second ‘application’ indicates that the system was used with sun burners it is clear from the illustrations, however, that the device stops down draughts. 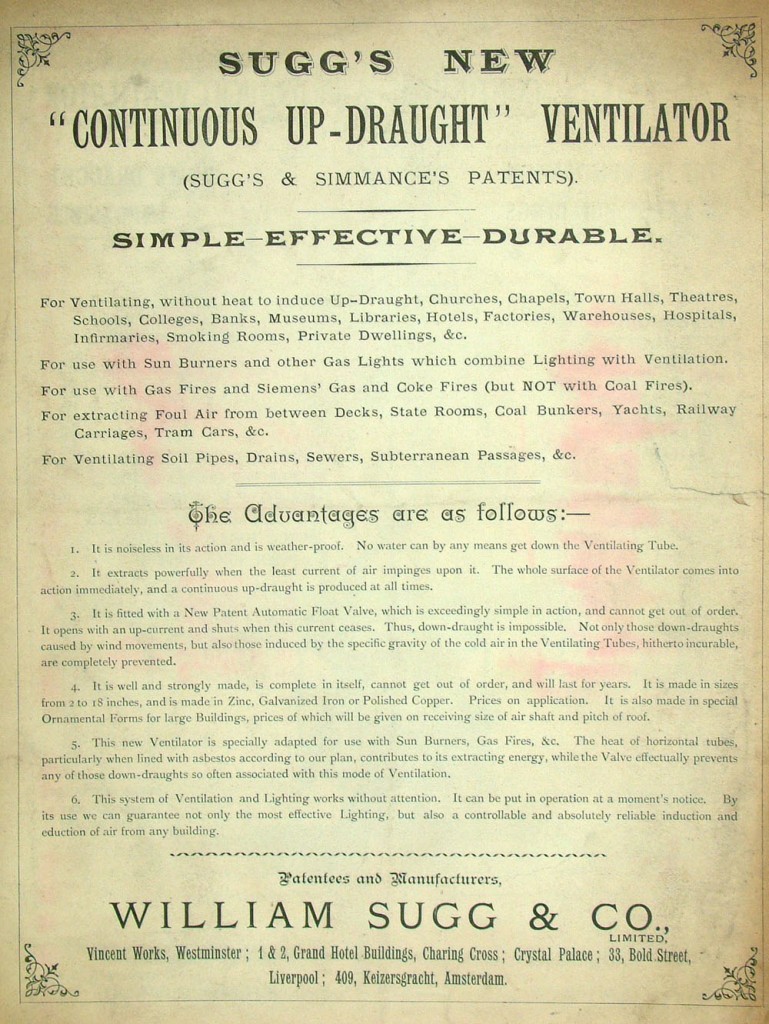 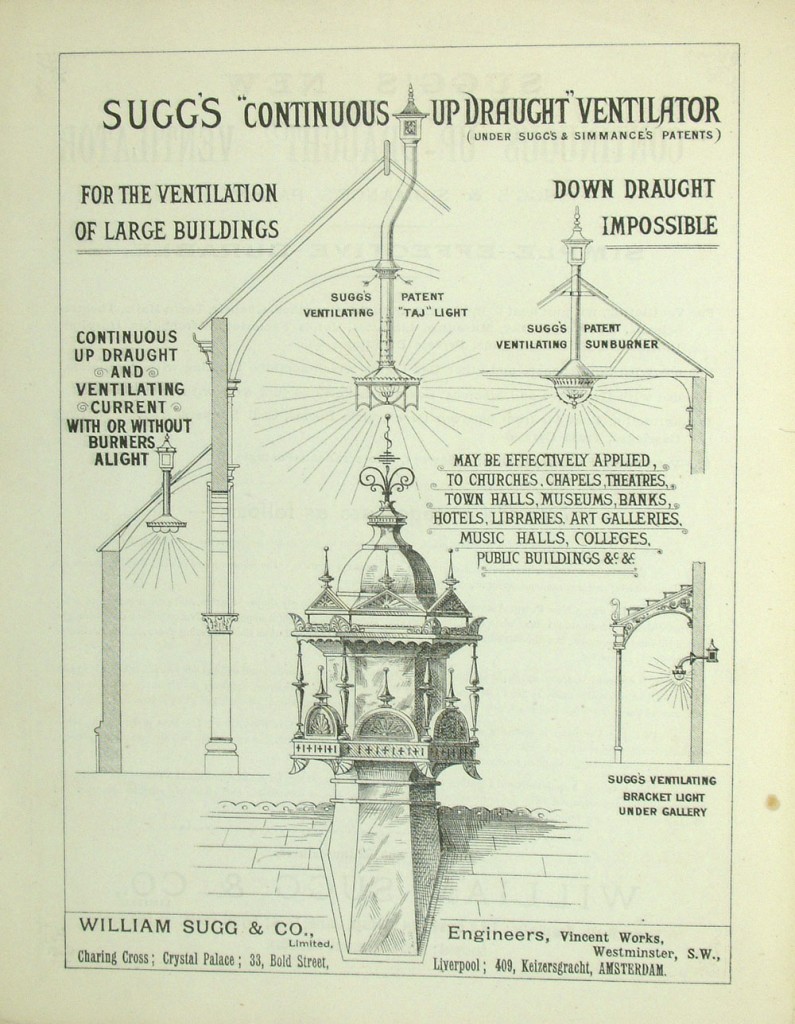 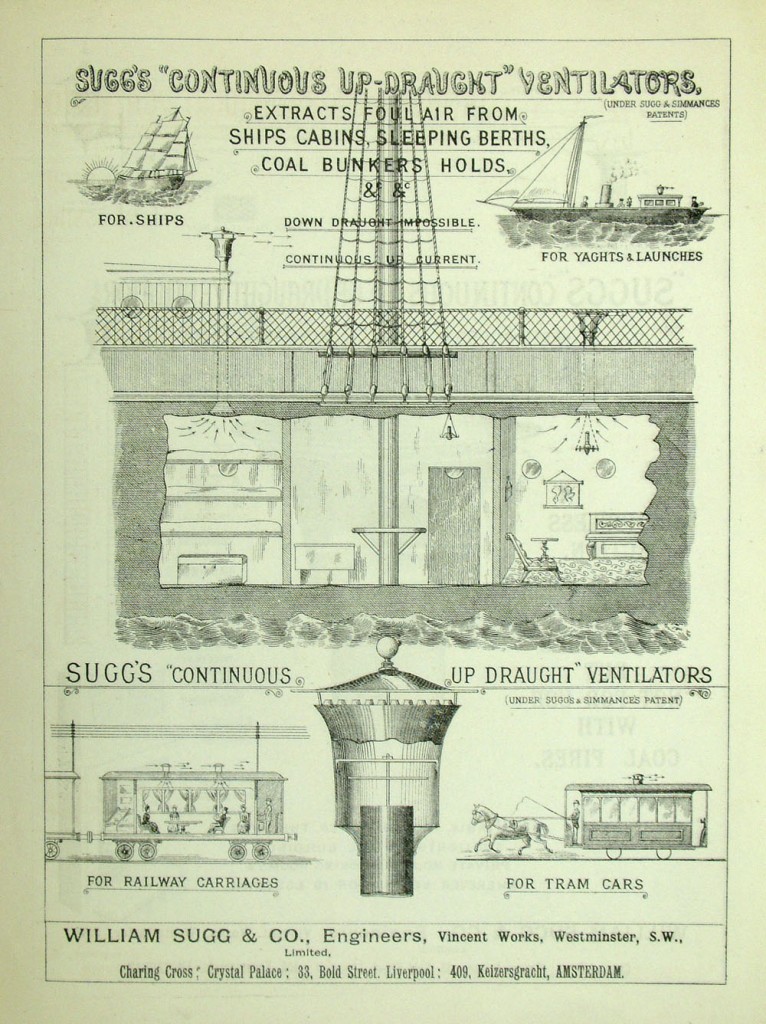 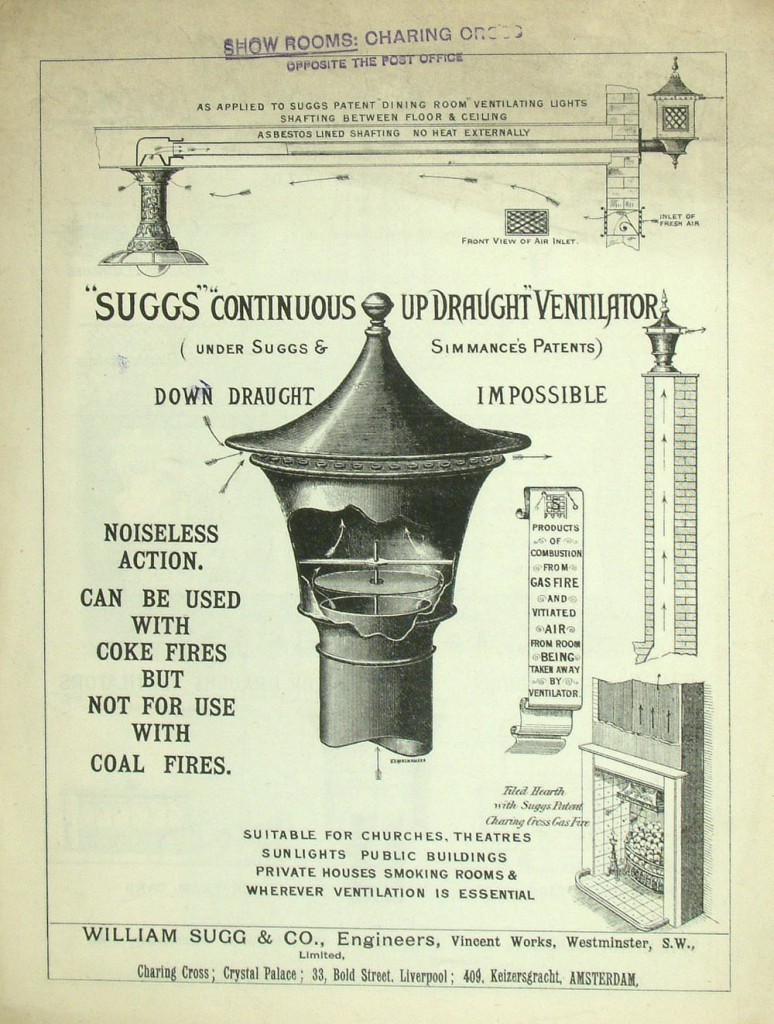 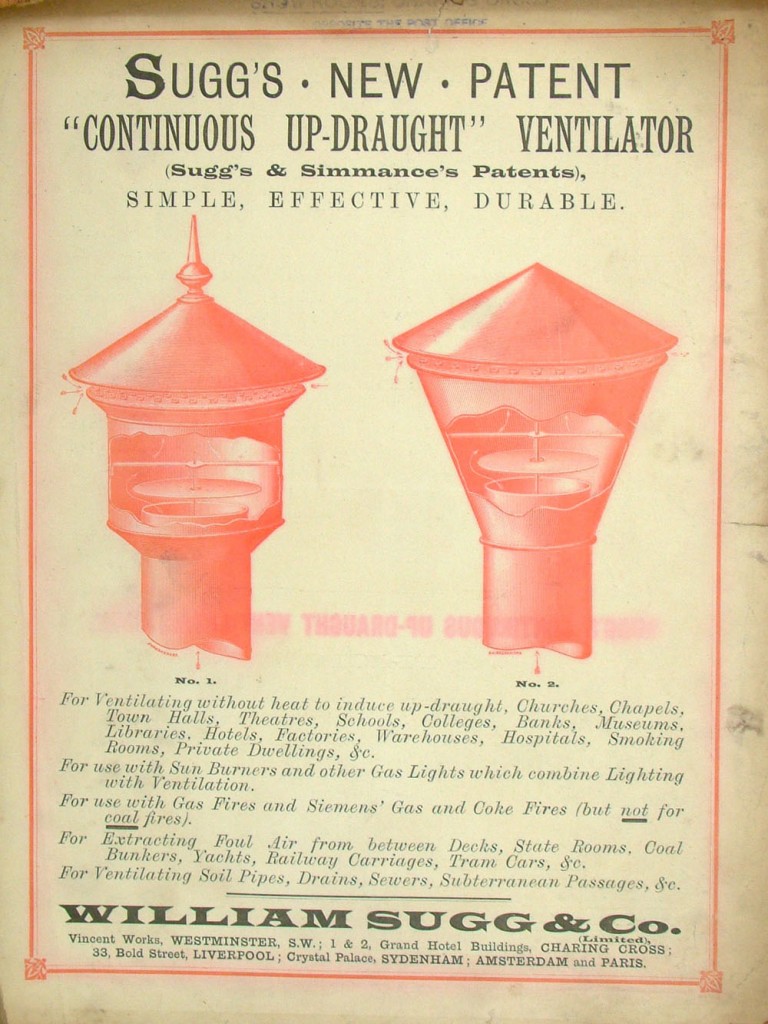 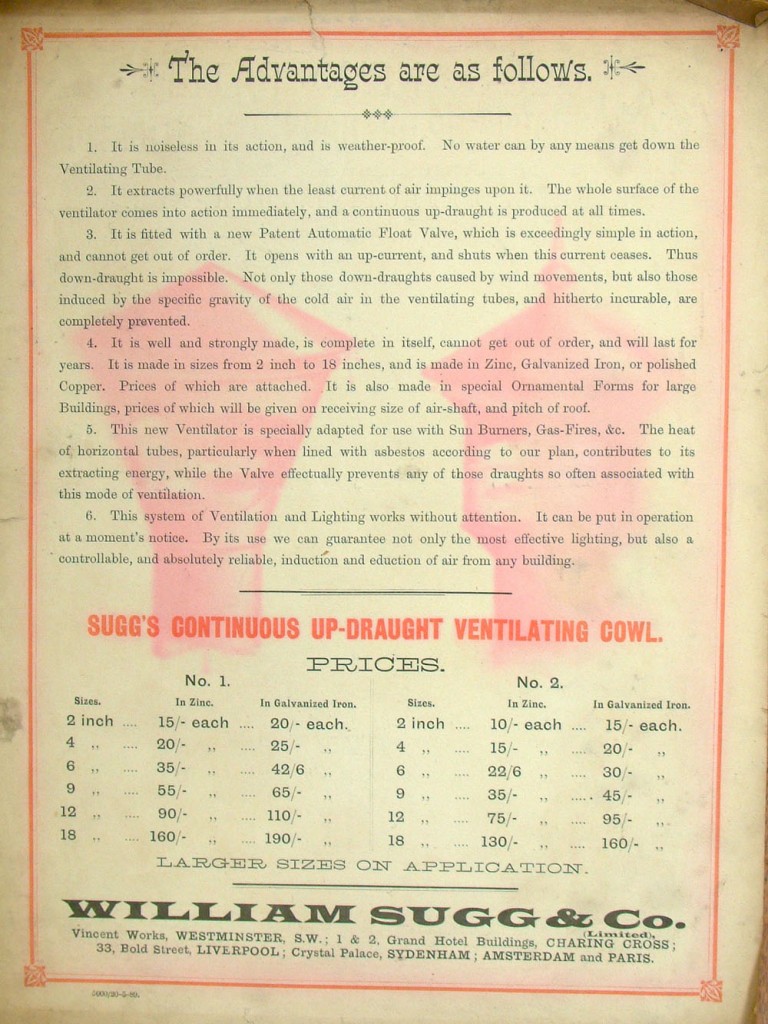 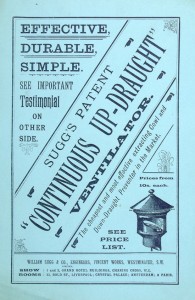 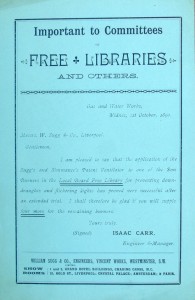 It would seem that William Sugg became well known for his expertise in the ventilation of his gas street lighting so that they burned perfectly steadily in high wind conditions.  Following the development of the sun burner he then applied his inventive mind to several ventilation problems one of the most unusual being that of the ventilation of ‘Motor Torpedo Boats’. You can see in the text below that these boats were ‘so low in the water that when it was at all rough they were more or less submerged’. For this application he devised not only extract but also inlet ventilators which you can see in the following illustrations. Click to enlarge top right to read text. Catalogue 1905. 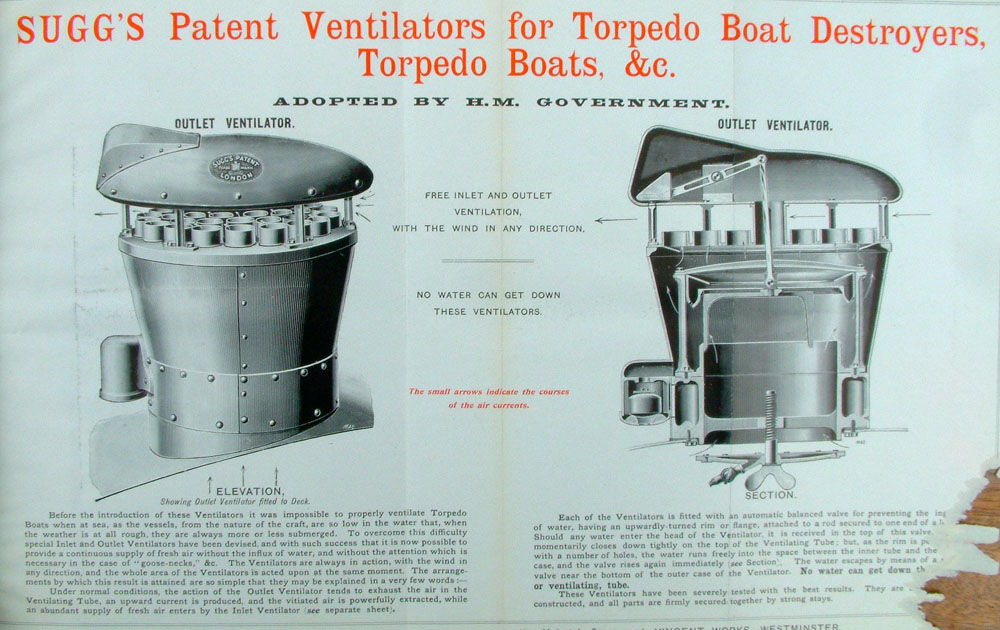 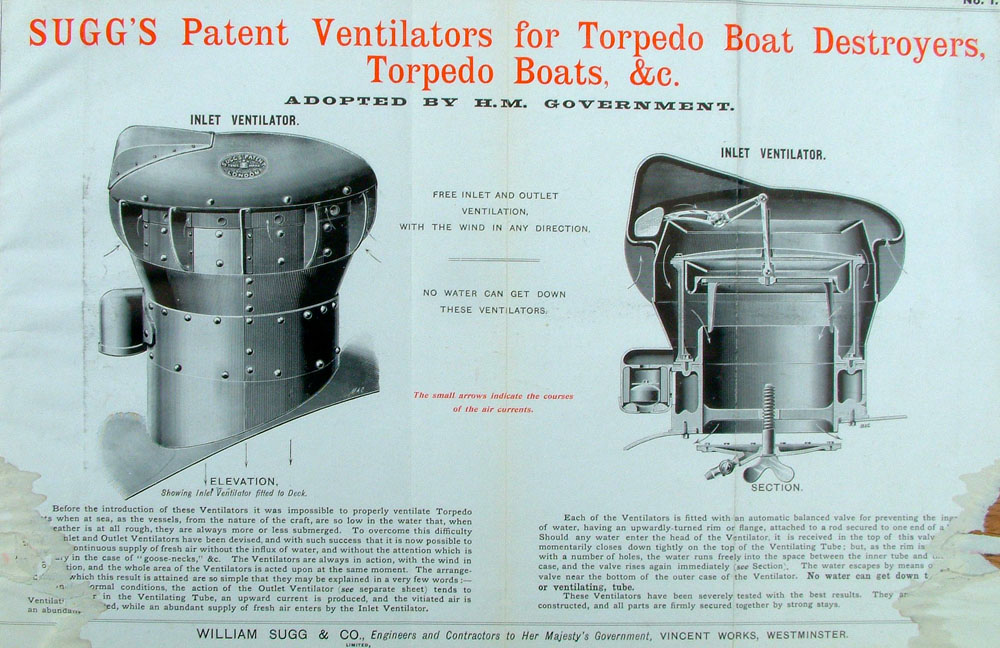 15 comments on “Ventilating Lamps and “Sun Burners” and Updraught Ventilation.”