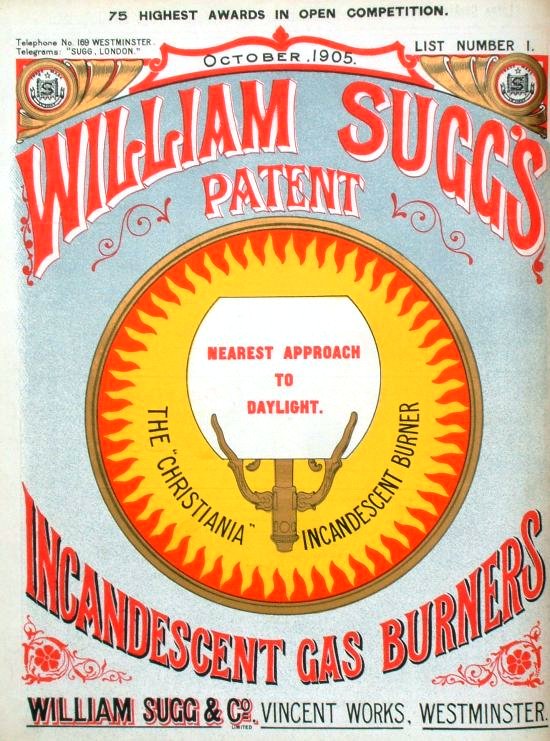 Whilst street lighting was the first type of gas lighting manufactured by William Sugg, it had been clearly demonstrated that the interior lighting of commercial buildings offered financial advantages through increasing the length of the working day and improving the viability of many processes that required better lighting.

Domestic lighting was not considered as important because the existing oil lamps and candles provided sufficient light for the simple life that existed in most homes and most if not all dwellings had an open fire. The new street lighting had even provided additional light to the upstairs bedrooms of many houses so that the candlelight required to see the way to bed could be extinguished once the room was reached! In addition, the lighting in the largest of houses and mansions had by this stage achieved a sort of ‘status’ using oil with ‘lamp rooms’ for cleaning and filling the oil reservoirs and staff trained to the tasks. Gas was considered ‘infra dig’ as being for the masses and clearly unsuitable for the lighting of the interior in the ‘better’ houses!

Whilst the burner was clearly the basis of any gas light, William Sugg had a very good ‘eye’ for design and sent many of his employees to design college to ensure that every product was designed to perfection. If you look through the many pages of lighting fixtures that were offered they are all different but they all ‘look right’ – they have proportion and balance which please the eye.

There are two types of open flame burner with which William was particularly involved:

The Christiania and Argand interior fixtures – as opposed to just the burners shown in the ‘burners’ section – provides an indication of the hugely successful design ability of William and the Sugg company.

A third design was developed by David Sugg, William’s first son by his first wife and is known as the Cromartie. This is another design masterpiece as well as an entirely different form of open flame gas lighting.

In addition to these superb designs there were also many simpler open flame designs such as the tee bar pendant and later such popular items as the swivel wall brackets that pull out from the wall to bring the simple single open flame light source closer to the user. These designs are shown under Simple Brackets & Pendants.

Once the gas mantle had been invented and developed beyond its initial fragility there was also a period of ‘conversion’ when upright open flame burners were converted to upright mantle and not long after to inverted mantle. We are now beyond the influence of William and these later conversions owe nothing to his design influence – indeed often being completely out of style or proportion with the bracket to which the conversion was attached.

The range of inverted mantle wall brackets and pendants were then followed by many new designs which are explored in Fixtures with Mantles. 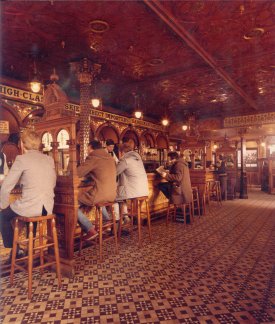 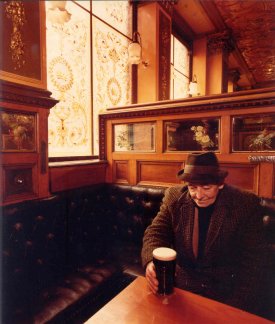 This is the Crown Bar in Belfast that was gas lit by Sugg Lighting in the 1980’s with large swan necks in the booths and pendant station lamps which were known as the Westminster over the bar.

Top of page
or
Back to ‘Lighting‘