This section has been added at the beginning of 2013 because there are many pictures of Sugg equipment in use which are too good to hide in the other sections or don’t exactly fit in anywhere else. Some are additional to existing pictures and if so carry a link to the relevant section for ease of reference. 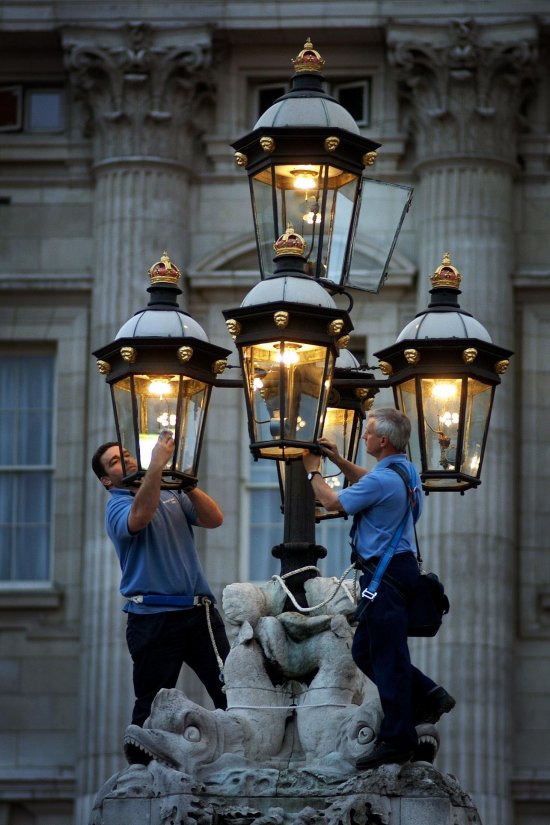 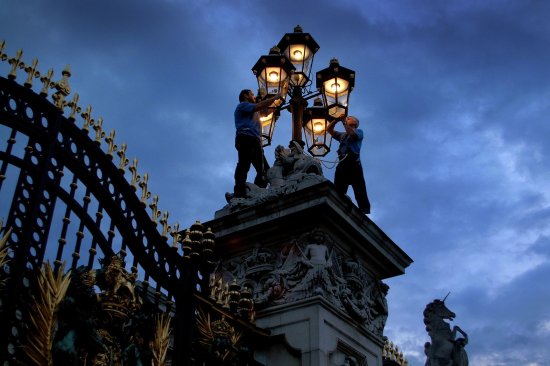 The Palace of Westminster
often known as ‘The Houses of Parliament’ 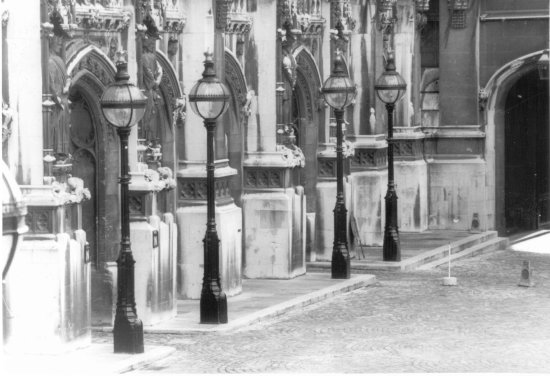 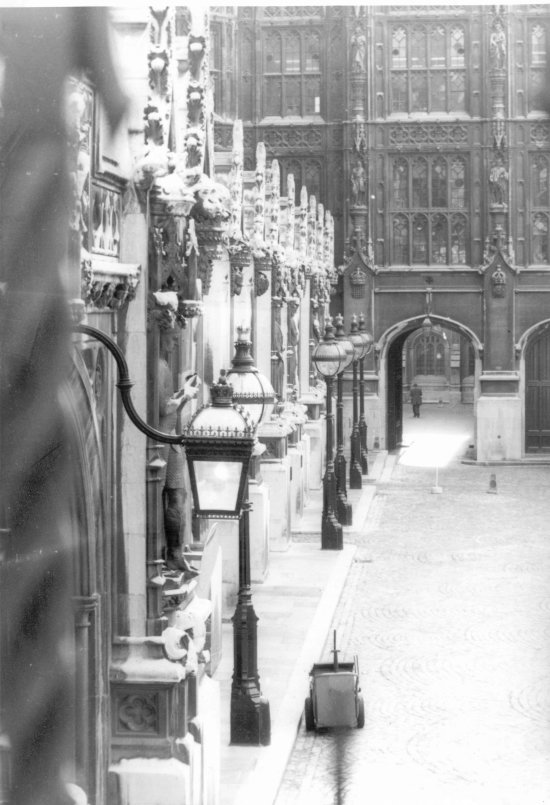 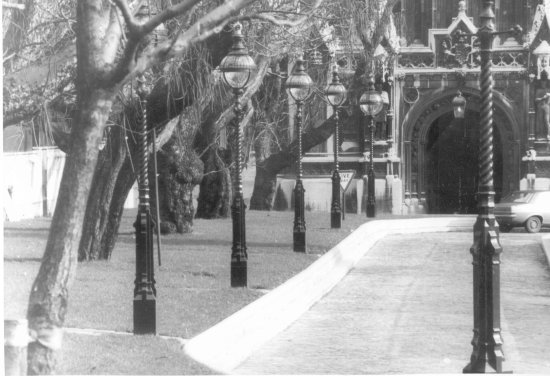 When an underground car park was constructed beneath New Palace Yard in 1972 – 1974 these original 8-panel William Sugg Globe Lamps were mounted around the new roadway. When they were manufactured originally these lamps had been mounted on iron pedestals on the top of the external pillars as in the photograph below from which they were removed and stored early in WW2. I believe the ironwork was melted down as part of the war effort to provide metal for armaments and aircraft.

At Sugg Lighting we refurbished these lamps and provided them with new solenoid operated, piloted, 6lt superheated gas burners. In order that these lamps would not be affected by a power cut, the electric solenoids were connected to the standby electric generator!

As a side issue, when I was taking the 3 photographs above with a long lens I heard the screech of brakes and a police car pulled up beside me wanting to know why I had been taking photographs for 20 minutes or so. I was fortunately able to satisfy them and was impressed that such care was being taken with the ‘Mother of Parliament’. The car bomb that sadly killed the MP Airey Neave whilst driving out of the underground car park was in 1979. 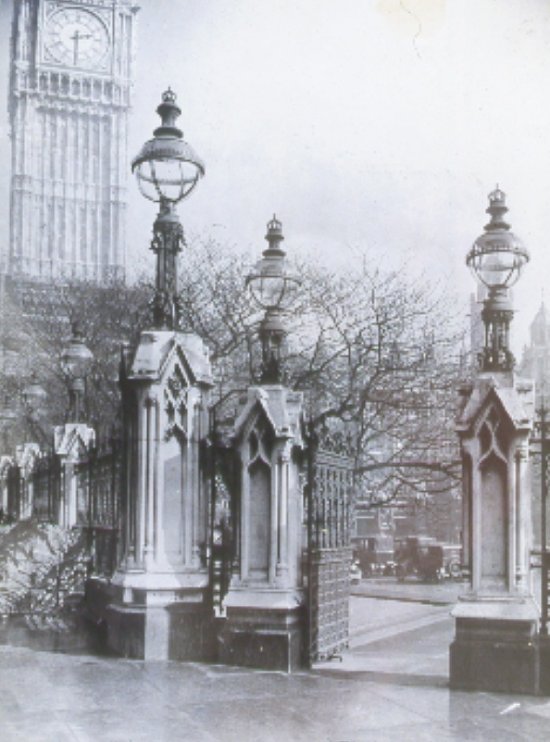 Finally in this look at Sugg lights at the Houses of Parliament are the three pictures below, the first two taken in June 2012, showing the same location and the entrance to the underground car park – now with modern steel barriers but the original Sugg Globe Lamps and columns are still there in the centre of the picture. 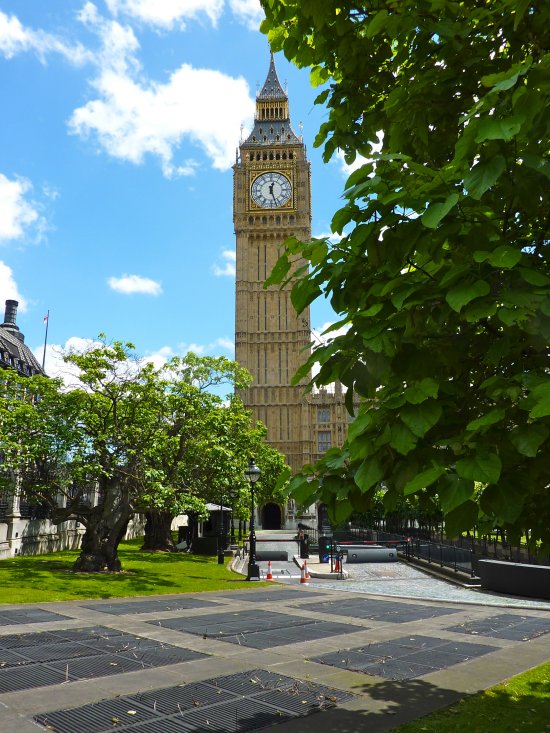 The two pictures, below, show the entrance and front of the House of Lords with a number of one-piece gas globes with 6lt burners, developed by Sugg Lighting to reproduce the original Gothic design by Charles Barry, that only had small open flame burners in 1834. These are likely to be the last street lamps ever designed for gas at the end of the 20th century! 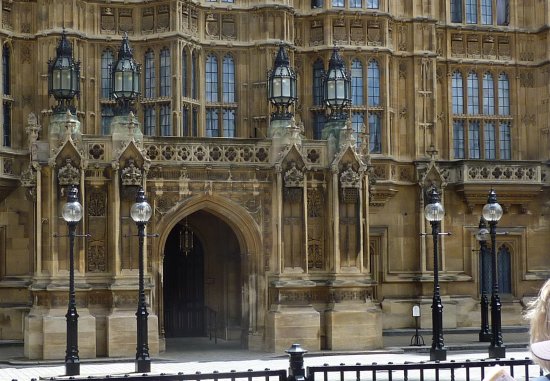 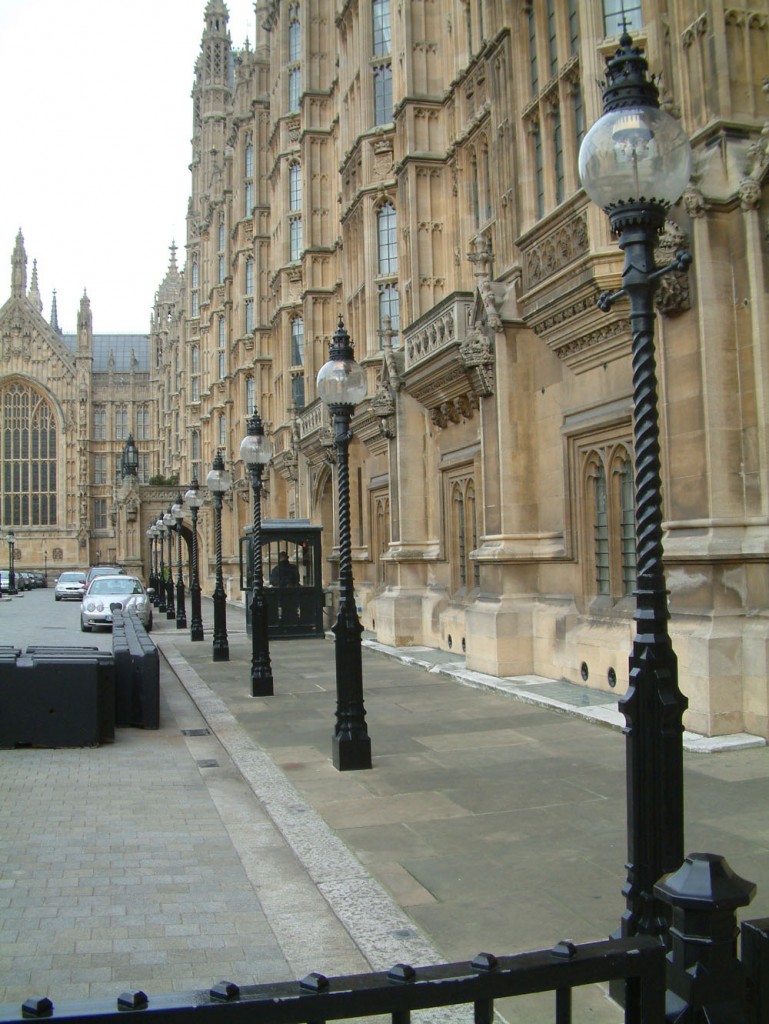 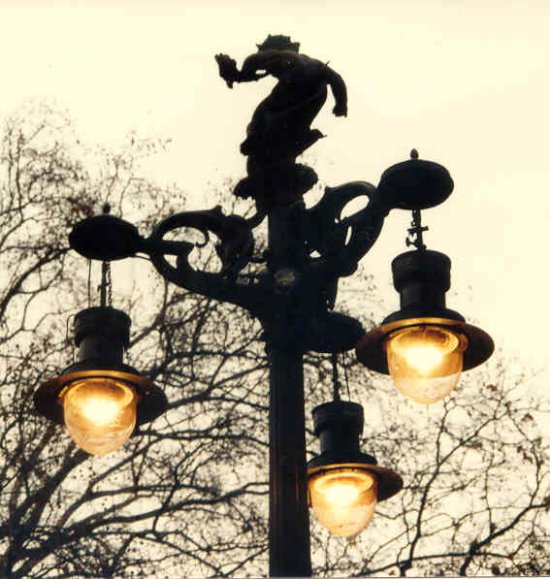 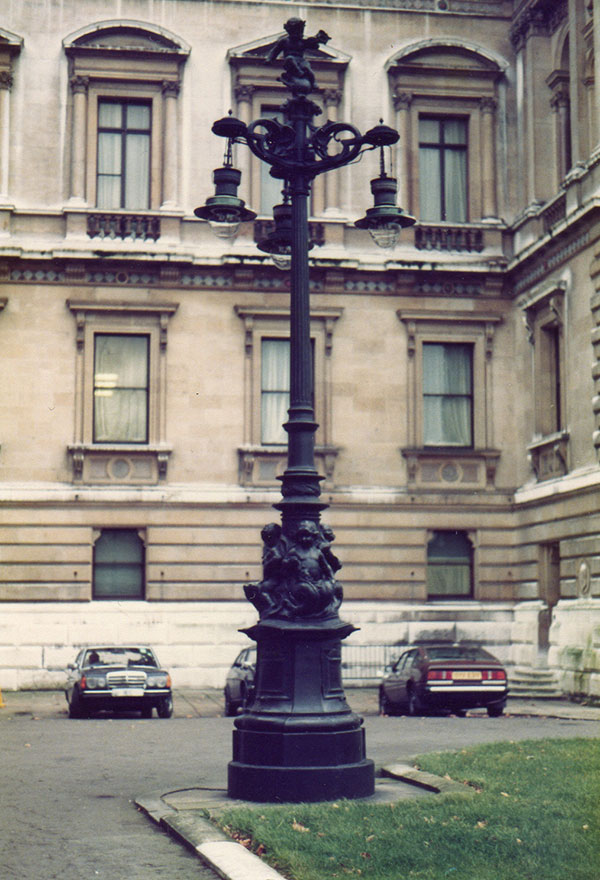 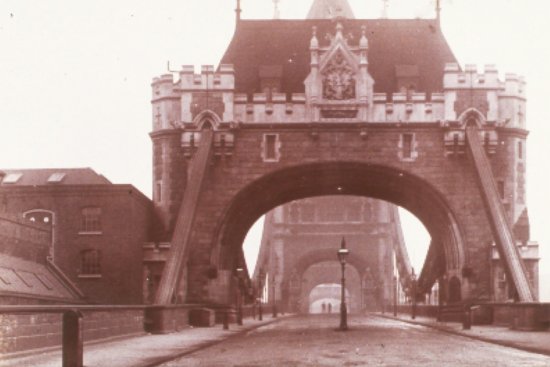 This amazing picture from the Sugg collection reminds us just how little traffic was using Tower Bridge in the early days of its existence, especially as this is one of the later bridges built over the river Thames. Opened on 30th June 1894 and gas lit by William Sugg whose factory is nearby in Westminster, this view of the Southwark side shows one of the lamps mounted in the centre of the carriageway. Today – 2013 – the bridge is used by some 40,000 people every day! (See also History)
The pictures below were taken in September 2013 and provide the 120 year comparison! 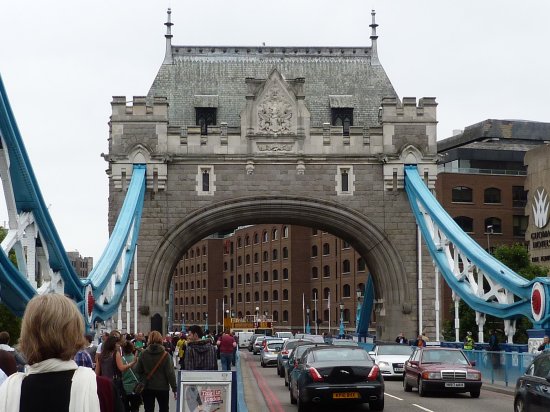 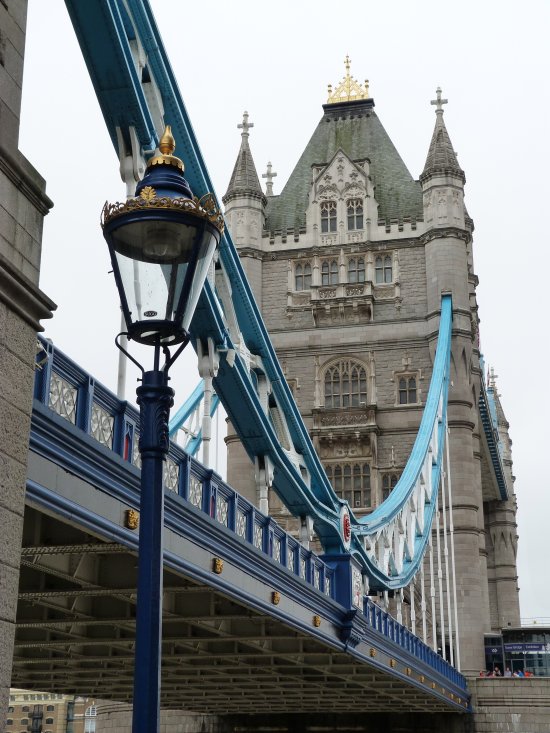 The Sugg Grosvenor lamps predominate in this historic area of London and can be seen, below, surrounding the garden of the Tower of London. Pictures September 2013 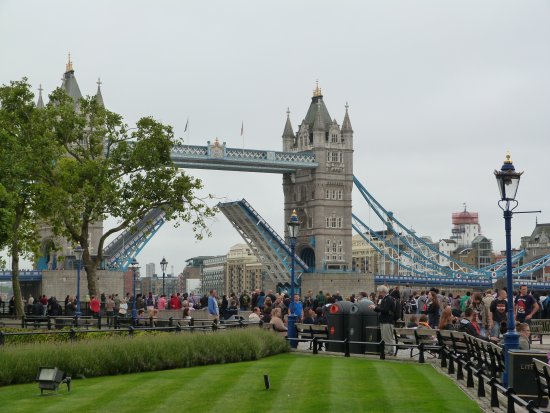 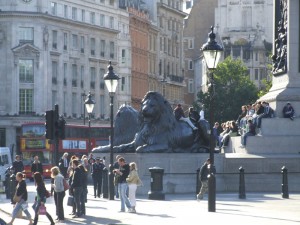 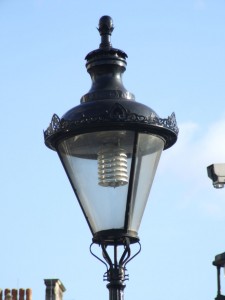 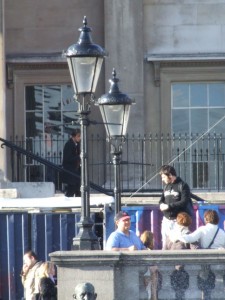 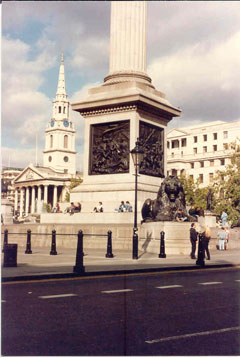 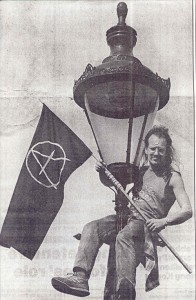 The project was completed shortly before the huge row about the Poll Tax in 1990 and the picture shows you how large and, fortunately for the protestor, how substantial the lamps are. It did survive and can be seen in the other picture by one of the magnificent lions. 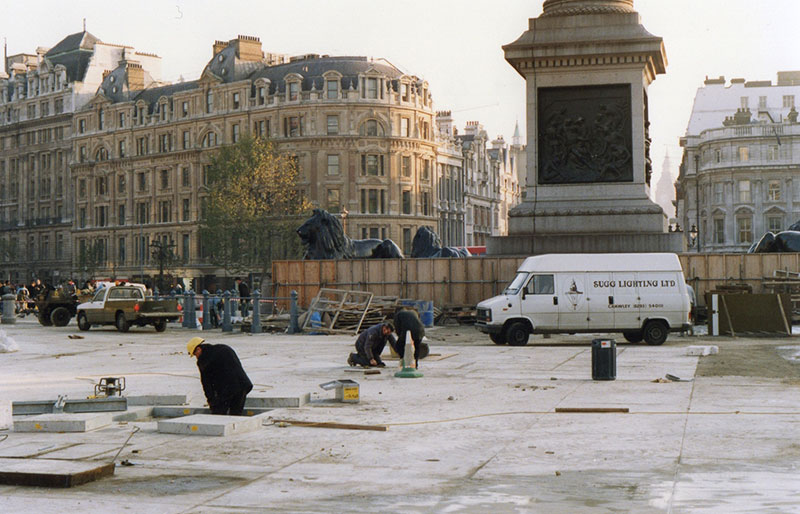 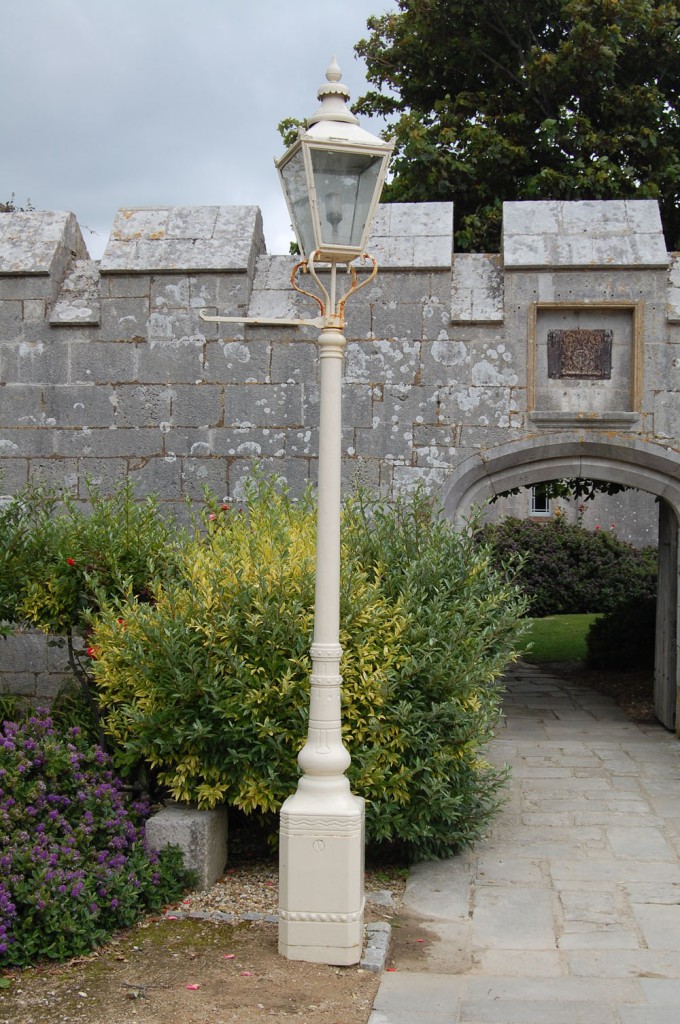 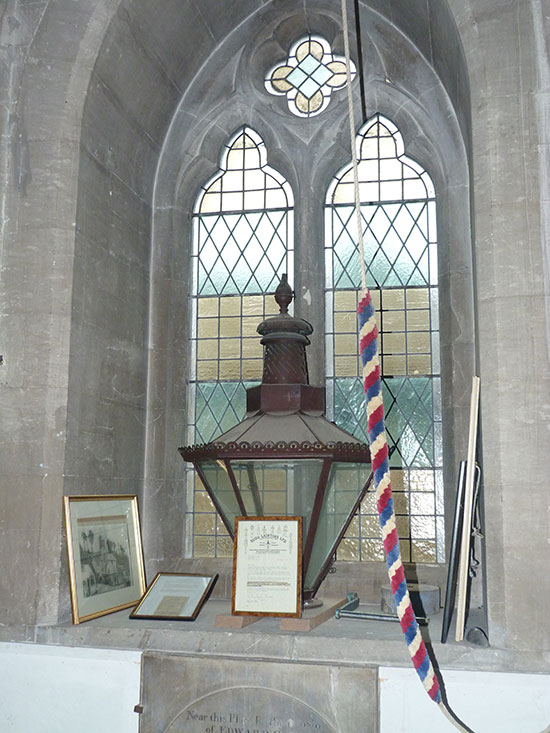 If you are ever in the pretty coastal village of Beer in East Devon you have a chance of seeing an original Sugg Lambeth lantern. I understand that it was originally installed in the town. The church dates from 1878 and the lamp could certainly be within a few years of this. I first saw this lamp by chance when we were visiting my cousin for the first time after a move to the area in 1993. It was sitting on the window-ledge in an area then designated ‘children’s corner’ and it is out of sight of the right hand door normally used as the entrance so I was amazed when I came round the corner and there was a fully glazed, complete 30″ Lambeth lantern!
I took the opportunity once I had returned to work of dropping the vicar a line and sending him a copy of an original 1906 catalogue illustration of ‘their’ lamp. Having visited the area many times in the intervening years, it wasn’t until 22 years later on another visit, I couldn’t resist calling in to see if the lamp was still there and the picture shows you that it is. Not only that, but my original letter has been framed and stood in front of the lamp! The only part of the letter that has been crossed out was a comment I made that should they ever decide that they did not want to keep the lamp, I would be happy to come to an arrangement – but that it should never be scrapped. The church itself is grade 2 listed and my view would be that this veteran lamp should be equally protected! 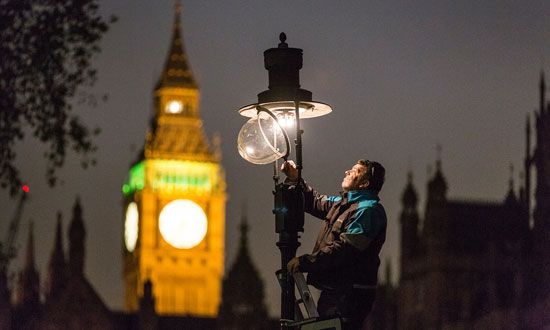 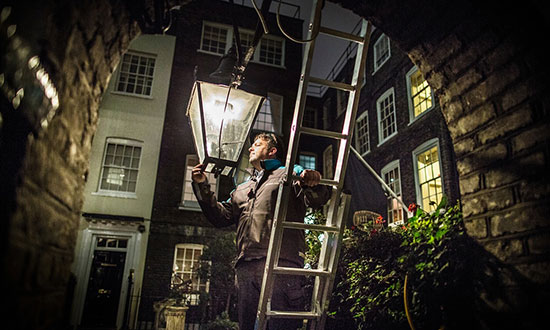