There are many forms of gas control that were developed by William Sugg from a simple tap through gas flow and pressure governors to remote control systems for multiple installations.

The use of gas flow controls has been illustrated under open flame burners with the chronological range designed by William Sugg over 26 years in which the flow control is an integral part of the burner. Whilst this arrangement clearly provided an excellent answer to the problems produced by variable gas supplies it was not necessarily the most economical solution where a number of lamps or even simple burners were running off one supply. 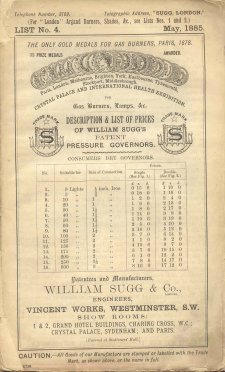 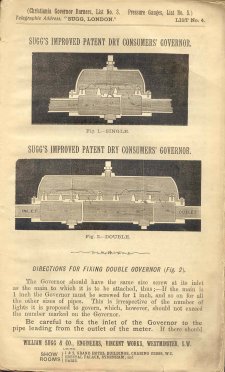 This List No.4 of May 1885 shows the incredible range of William Sugg’s Patent Pressure Governors from No.1, suitable for 3 lights all the way up to No.16 for 300 lights.

When gas was first distributed, the only basis on which it was sold for lighting was related to the number of ‘lights’, rather as the governors above. This was clearly pretty inaccurate as the amount of gas used by ‘one light’ could vary enormously. Apart from all the work William Sugg did on burners and jets which you can read about under ‘open flame burners’ a very early product was the gas meter. You will note how the size and capacity of the gas meter was known by the number of ‘lights’ it could feed. Amazingly this method of naming gas meters remained right up until the introduction the most recent and electronic gas meters!
The following article dates from 1848, only 11 years after the formation of the Company and was unearthed by Tony Marks, a gas historian :

GAS METERS.
District- The first mention in the minutes concerning the provision of consumers meters occurs on the 14th November 1848 with ʻMr Sharpe having stated that Mr William Sugg of no.19 and no.20 Marsham Street, Westminster, would supply his meters upon the following terms viz- a 3 light meter at £2 2s, 5 light £2 10s, and a 10 light £3 5s, subject in each case to a discount of 25 per cent.’ The directors then resolved ‘that Suggʼs meters be adopted by this company and that they be supplied to consumers at the following prices viz- 3 light at 35s, 5 light at £2 2s, and 10 light at £2 15sʼ or they could rent them at a charge of 1s 6d a quarter. The initial order to Sugg consisted of ten 2 light meters, twelve 3 light, and six 5 light. There were 24 applicants for meters recorded on the 28th November who wanted fifteen 3 light and nine 5 light of which only four bought their own meters. By the 27th December another five applicants were recorded requesting 3 light meters of which only one was a purchaser the others deciding to rent their meters and on the 9th January 1849 another five had 3 light meters all rented this time. This month a cheque was sent to Sugg for £49 in payment for his meters.
The directors meeting of the 9th January ‘resolved that consumers be allowed to supply themselves with Edge’s meters or Sugg’s (as preferred).ʼ However a week later ʻit appearing that the resolution of the last meeting in reference to the supply of Edge’s meters was at variance with the resolution of the meeting held on the 14th day of November 1848. Resolved that Sugg’s meters only be supplied in future.’ This was adhered to Sugg was still supplying in 1853 and 1854 with one exception in August 1850 when the directors decided ‘that one of Defries dry meters be allowed to be used at the church it being considered preferable to a wet meter which would be liable to freeze in such a situationʼ which implies all Sugg’s meters were of the wet type.
(From the Slough section of The Gas Works of Buckinghamshire by A.T.Marks) 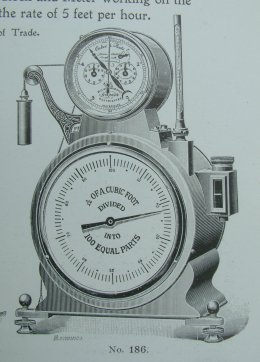 The Company made many Gas Meters and the example below is stored in the Science Museum. The extra decoration indicates that this version is an earlier model. 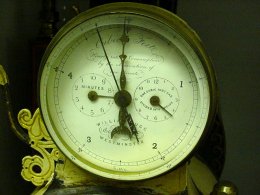 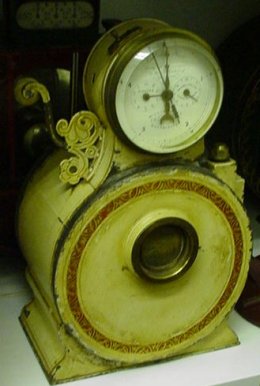 These pictures were seen by the Macdonald family in Melbourne, Australia who had a number of items that had been in their family for many years. As you can see below their ‘curiosity’ turned out to be the dial from the top of a Sugg meter. What I learned from these new pictures was that the back of the dial was glazed and, as you can see from the third picture, there was a gear drive that came up through a hole in the bottom. 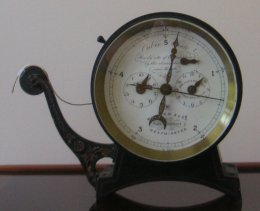 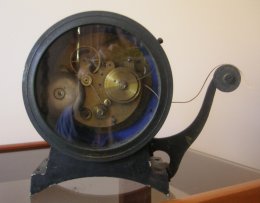 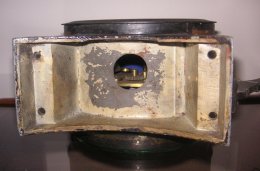 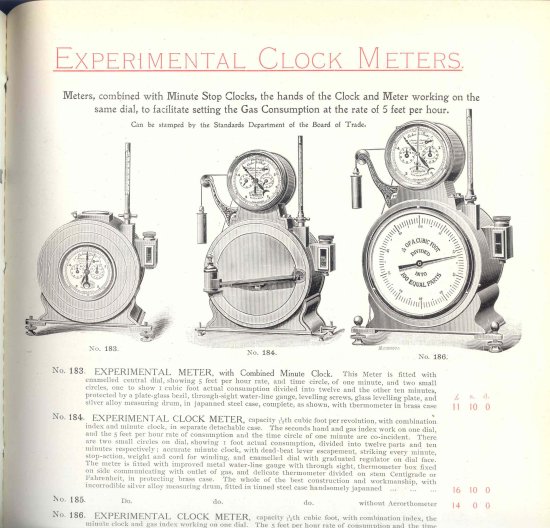 This page from the 1904-8 catalogue bound set clearly shows that what we have been looking at is one of the ‘Experimental Clock Meters’.

AND THEN – I received the following pictures from Mark Spiteri in 2016 who had this “Clock” on the wall.

As you can see it is the same part of an experimental meter that the Macdonalds found but this time in the UK!
However, if you look carefully you will see that, apart from having it mounted on a curved bracket, there is extra decorative ironwork on the arm at the left which matches the ironwork on the meter in the Science Museum so is likely to be older than the Macdonalds version which is simplified as in the literature immediately above. 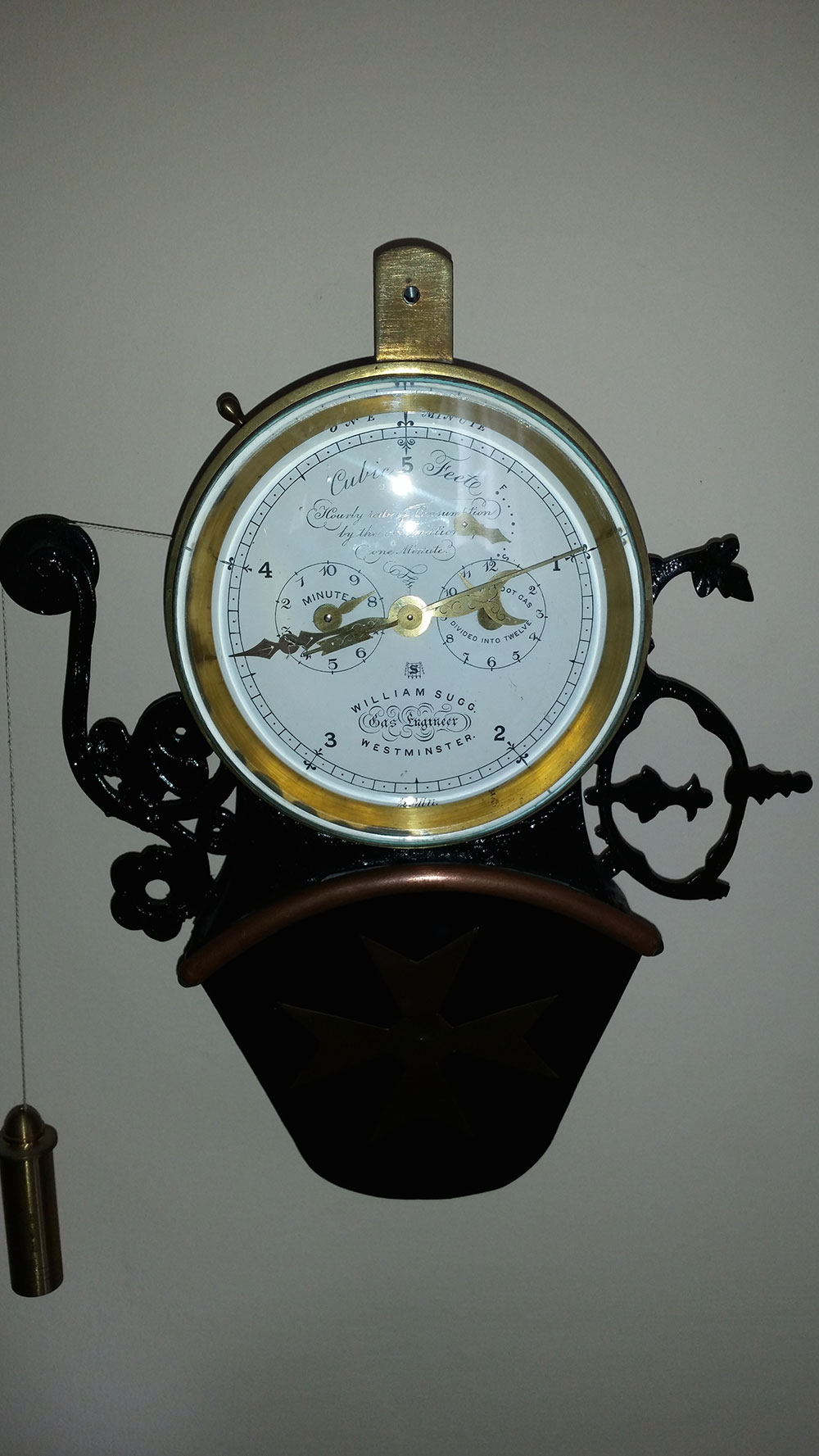 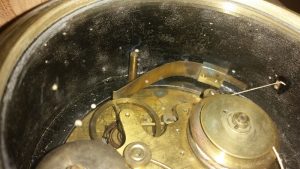