It is clear that in order to make an improvement in any technical subject it is necessary to have a means of measuring it. Light is a topic with which William Sugg spent many years experimenting and he realised that it was necessary to establish a unit for the measurement of light. In 1862, when he had been working on the lighting of the Grand Committee Room of the House of Commons, he decided on an observational experiment. “I made some pencil markings on a piece of paper and took half a dozen men to read the paper at whatever distance they found convenient. The answer was one ft candle, i.e. one candle at a distance of one foot. This provided me with a basis of comparison for all other measurements of light and, indeed, became the unit in common use.”

This commentary is drawn from a paper read to the ‘Civil’s’ by Alexander Pelham Trotter in 1892 on ‘The distribution and measurement of illumination’ which was attended by William. In the following discussion Mr W.J.Dibden said that Mr Sugg first proposed the ft candle thirty years ago as the unit for illumination. WTS then added several observations from which the one above is drawn. He also commented that the room in question was the only room where he had been able to feel satisfied in the lighting. (This important reference was found for me by Geoff Brundrett – a co-member of the CIBSE Heritage Panel who had remembered reading it on some occasion and finally unearthed it! CS)

If the ft candle were to be the unit of measurement, it was necessary to establish the performance of a ‘Standard’ candle. This was done by measuring the rate at which the candle – or in this case, a pair of candles – burned using the Sugg’s Equal-Beam Candle Balance. The Candle Balance allowed the tester to check the number of ‘grains’ of wax burnt in a fixed period.
The illustration above is taken from the 1904/8 catalogue and the picture below recently obtained from the Science Museum is clearly the same item. (This picture and the following set are by courtesy of Joan Waters – co-member of the IGEM History Panel.) 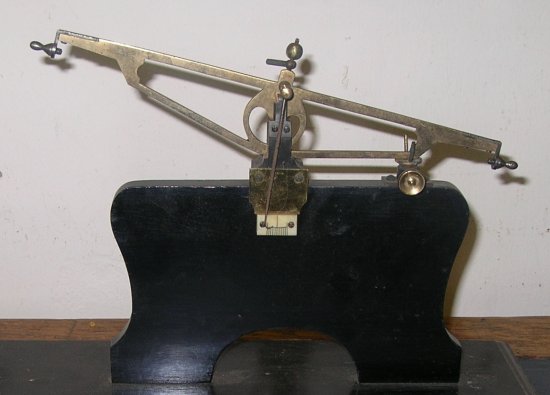 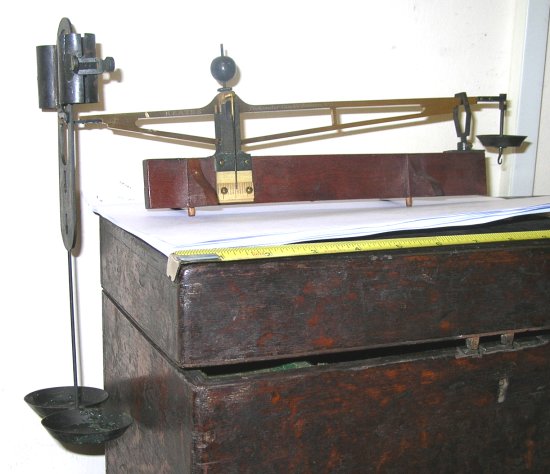 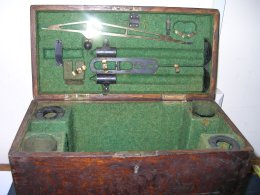 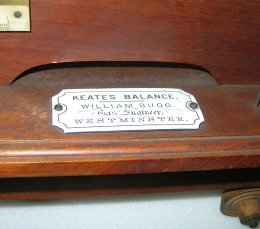 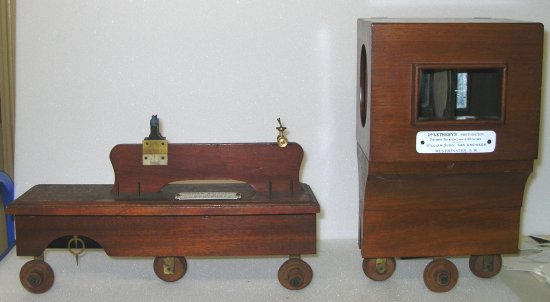 Dr Lethaby worked with William Sugg on a number of scientific products and his early photometer is shown here. Clearly it was set up on a pair of rails and the label states that the ‘Distance Between Lights 60 inches’. 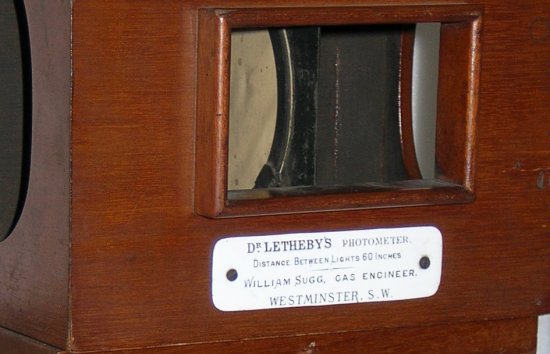 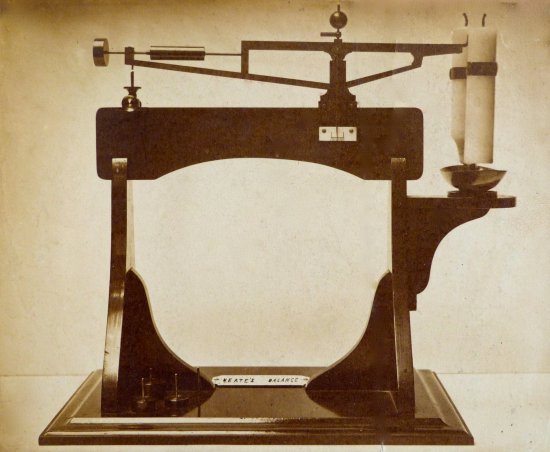 This photo from the Wm Sugg marketing scrap book shows the ‘Keates Balance’ complete with the twin candles to enable the rate of burning to be measured. 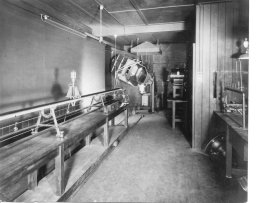 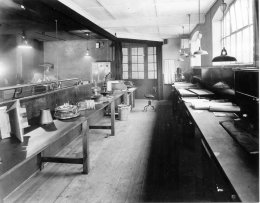 The Sugg lighting laboratory developed by Crawford Sugg in the 1930’s was built around an ingenious piece of equipment known as the ‘Mirrorhead’. Light measurement was achieved using a photometer similar to the Lethaby one mounted on a long bench which you can see in the left hand picture of the pair above. This is all very well for a single measurement in a single direction but of course a street lamp provides light in all directions. A gas lamp simply cannot be rotated so that the light can be measured in this way. Crawford Sugg designed the ‘Mirrorhead’ to collect the light coming from the light source in any direction and point it down the photometer bench.
The Model shown in the pictures below illustrates the Mirrorhead including the view from the direction of the photometer. The photo below these two shows the path of the light reflected by the mirrors within the Mirrorhead. As the head is rotated, the light can be measured from the vertical to the horizontal and, by rotating the lamp itself on its vertical support every direction can be measured. 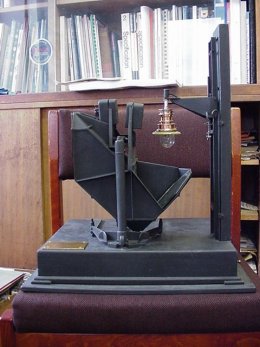 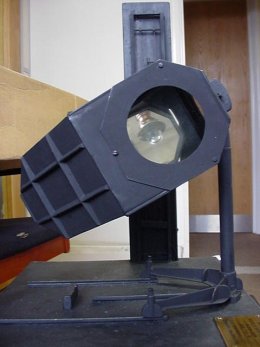 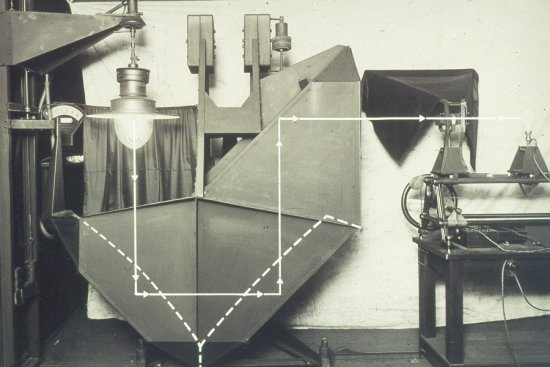 Mirrorhead showing path of light from a Rochester to the photometer bench. 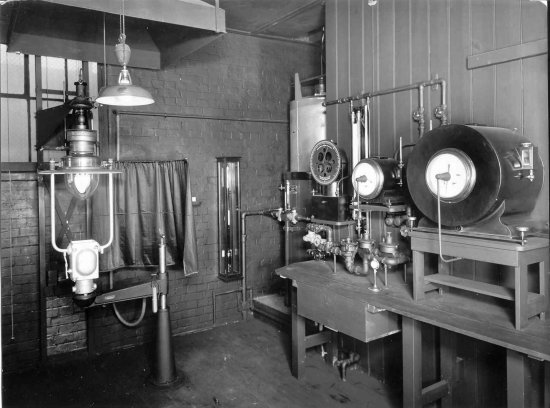 This photograph shows the test meters, the gas holder and even the barometer in its case on the wall – all items you can see in other parts of this website. The Rochester in this case is the ‘Upright’ version but still rotatable and in the identical position to the one shown with the Mirrorhead in position. The whole device is mounted on rails so that it can be slid to one side whilst the lamp is fitted etc.

One of the essentials used by every street lighting maintenance and installation company today is an access tower. In the early days of street lighting the posts were short and the lamplighter could turn on the lamp with a pole, sometimes whilst riding a bicycle! For maintenance, access was by ladder. As gas street lighting became more powerful and the lamps were mounted on progressively taller posts access became a major problem. Crawford Sugg realised that a motorised access tower was what was needed and this 1926 Singer was converted into what may well have been the very first. 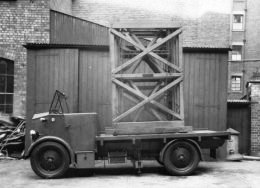