(This is an element of Lighting – Interior Lighting) 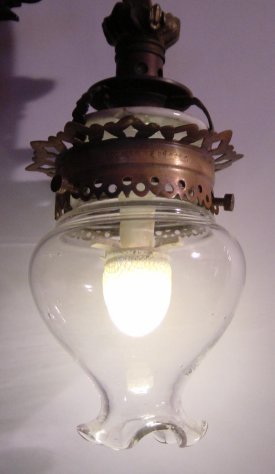 The need to improve the illuminating power of gas after some 70 years of open flame burners was accelerated by the development of electric lighting systems which were clearly going to be the future competition. Whilst the invention of the mantle is accredited to Carl Auer who was conferred the title of “Dr Carl Auer von Welsbach of Vienna” by the Austrian government for his work, he was a pupil of Robert Wilhelm Bunsen after whom the famous ‘bunsen burner’ is named. Bunsen had been working on the chemical action of flame and needed a non-luminous flame, the exact opposite of all the lighting flames that were in use at that time. He experimented at length with the admixture of gas and air through the relative size of the openings for both gas and air until he achieved the stable bunsen burner. His pupil Carl Auer later used this clean burning flame whilst investigating the properties of rare earths. The story goes that he discovered almost by chance that an intense glow came from playing the flame on a splash of the chemical on the edge of an asbestos sheet. Doubtless hundreds of experiments later he produced the first incandescent mantle with a mixture of rare earths so starting the largest and most important revolution in the world of gas lighting. Indeed the mantle probably extended the use of gas for lighting by as much as 50 years. (Some details extracted from ‘Lighting by Gas’ by Dean Chandler 1936)

The photos at the top illustrate the two most common mantle arrangements developed for use on coal gas. On the left is a typical ‘upright’ mantle in which the long sock-like mantle is supported by a hook from above with the open end sitting just over the head of the burner. The gas/air arrangement is almost identical to the bunsen burner whilst the glass cylinder channels the air to pass up the tube drawing the mixture strongly up the inside of the mantle. Without the glass this burner will not operate properly. It is very similar in application to the chimney on an oil lamp and also on the argand open flame burner.

On the right is the ‘inverted’ mantle suspended on it’s ceramic nozzle. The glass in this case is largely decorative but with the important task of keeping the mantle as hot as possible for maximum incandescence and for avoiding draughts – which is much the same thing. However, the burner will operate without the glass. The inverted burner was a development of the upright burner designed to point the light in the direction it was required. An upright burner would always produce a considerable shadow around its base whilst lighting the ceiling admirably!

One of the immediate advantages of the upright mantle was the ability to retrofit this burner assembly directly in place of the open flame burner in both interior and particularly street lighting and William Sugg manufactured tens of thousands of replacement burners for this purpose. 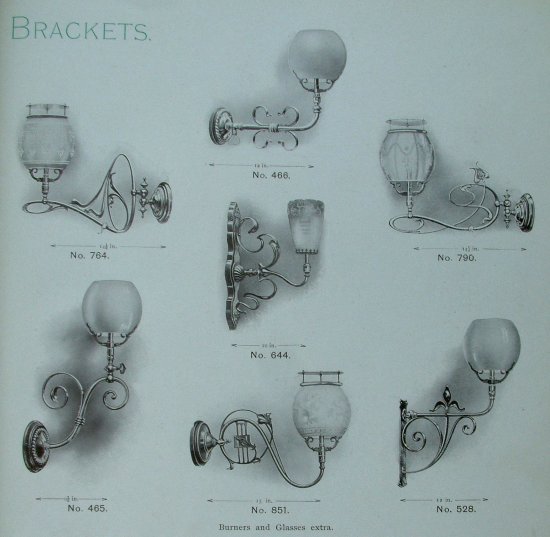 This page from the 1909 catalogue illustrates a range of wall brackets, very typical of the art nouveau age, shown fitted with upright mantle burners which are noted at the bottom as “Burners and glasses extra”. This of course would allow for the fitting of a simple open flame burner if the customer preferred, although it would seem unlikely with the improvement in light performance. 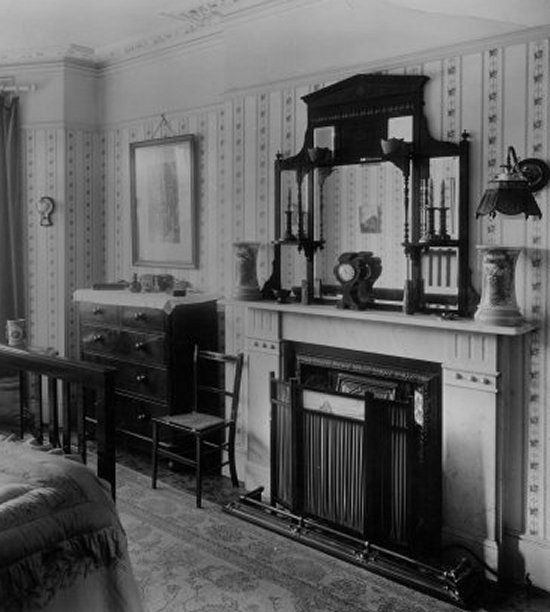 This interior is a typical 1930’s bedroom with two inverted mantle wall bracket fixtures. The fixture beside the window is the ‘Elite’ inverted burner with ‘Handsome Wall Plate’ as shown in the catalogue below. The one on the right is a standard wall bracket including glassware with a fancy material shade hung clear of the glass to reduce the heat on it as can be seen in the close-up below. The small tube leading off to the right is the remote control from a switch by the door. 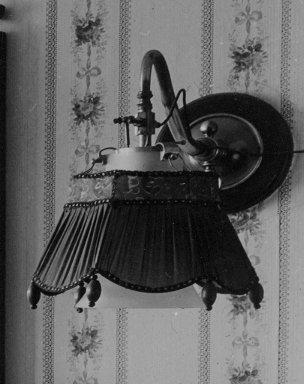 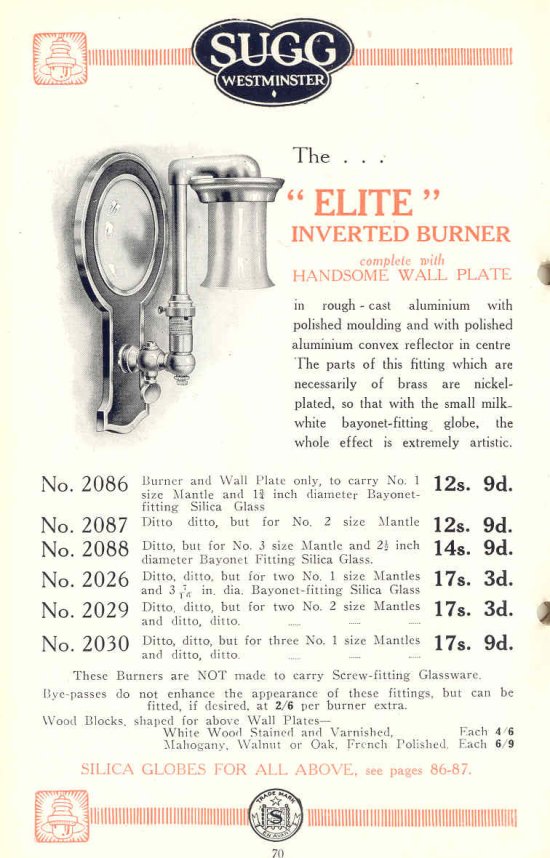 There are a great many interior fixtures that were produced by William Sugg & Co. over the period from 1900 to post WW2 when interior gas lighting finally succumbed to the electric competition. I hope to include a selection of these in due course.

In the meantime the following pictures should provide a taster: 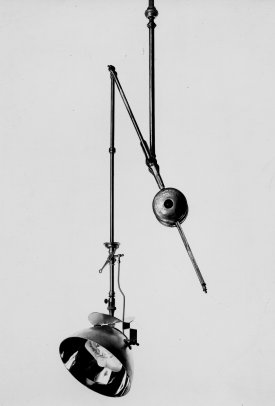 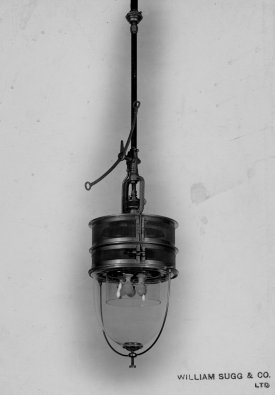 Here are two interesting interior gas lights that show the ingenuity of the Sugg designers in their efforts to provide gas lights for every application. On the left is an adjustable pendant light known as the ‘Directive’ “to focus a powerful light on any desired object” according the literature. On the right is a design for use in possibly explosive atmospheres using ‘Davy’ gauze as used in a miner’s lamp. 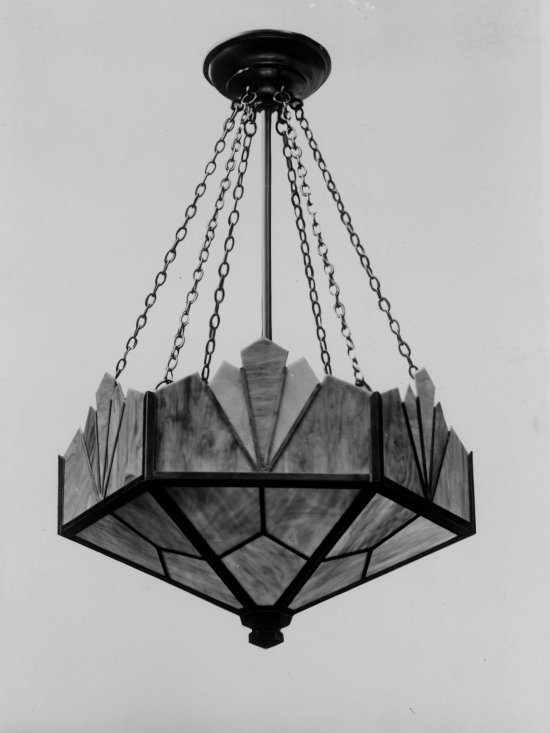 The pendant gas fixture above is typical of the art deco style that preceded WW2. 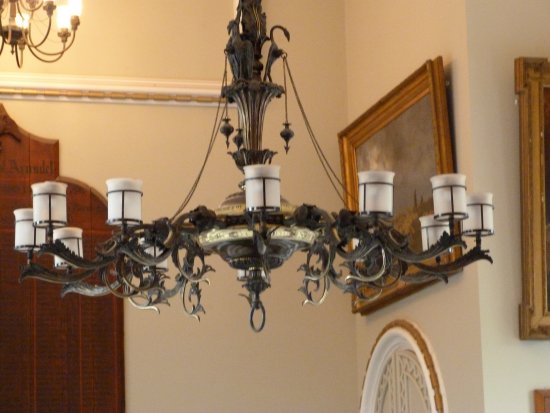 This splendid 12 arm pendant with 3lt superheated burners on each arm making a total of 36 mantles is mounted in the Town Hall in Arundel, West Sussex. The fixture is suspended from a decorative ventilator shown below left and the 3 lt burner can be seen on the right. It is still used occasionally (2014) and is lit by turning on the gas to the whole fixture and walking round lighting each burner in turn with progressively interesting result!

The burners are Sugg ‘Exeter’ burners which were offered as individual items to be built into any fixture design but also “replace easily the obsolete upright mantle type of burner in places of worship, public offices etc”. 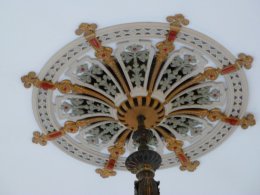 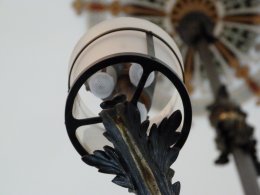 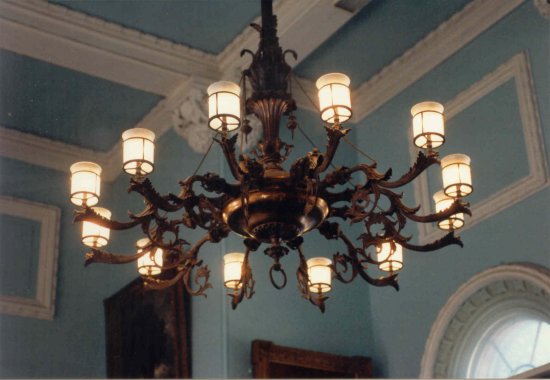 Many years ago – before they changed the colour scheme in the room – I took this picture when the chandelier was lit for me after Sugg Lighting was asked for some spares and we discovered this unique fixture.
There is a story that this was one of 6 pendants made for the Great Exhibition after which one went to America, one possibly finished up with Winston Churchill, this is the third one and the other three were scrapped. Needs more research! 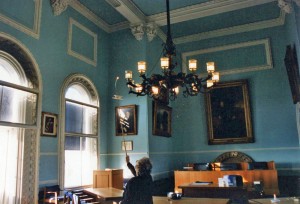 Click to see more closely how this fixture is lit! 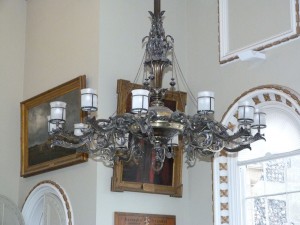 The additional pictures above and below illustrate the fixture in 2014 and you can enlarge them to see more closely the detail. This lovely room is very popular for wedding ceremonies – hence the extra pictures!

Find out more at https://www.arundeltowncouncil.gov.uk/main.cfm?type=WEDDINGS 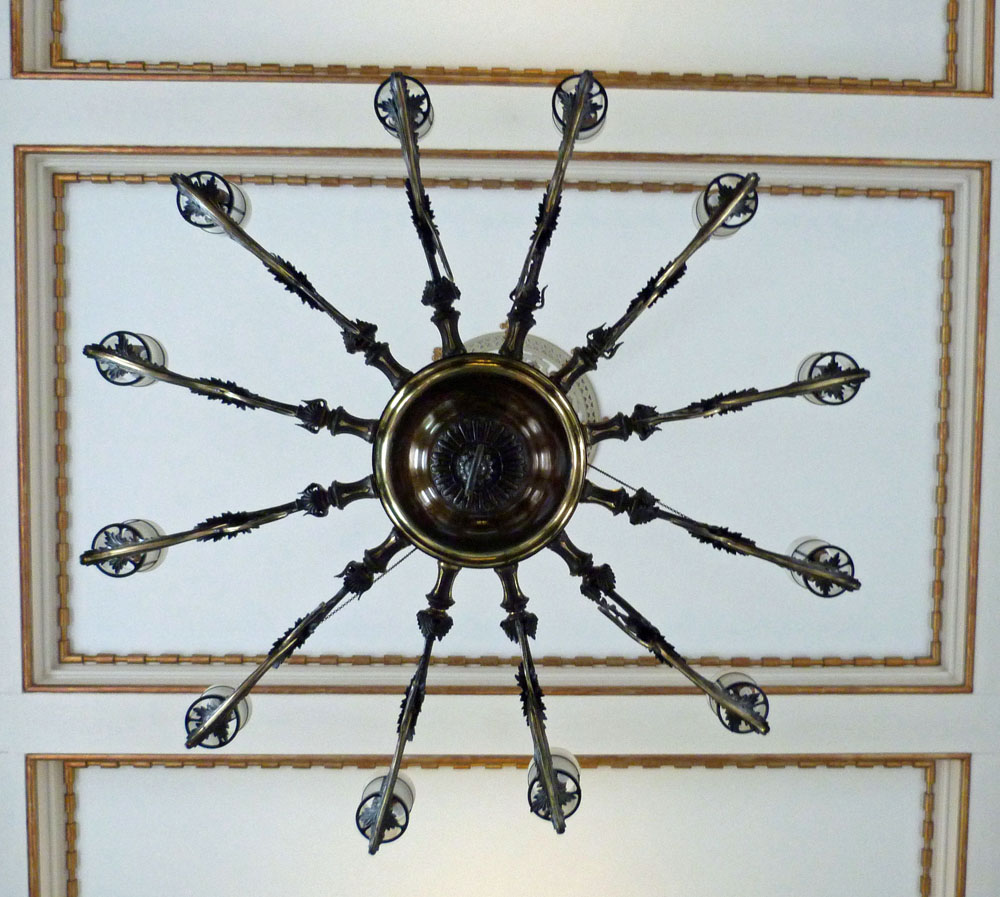 The following three pictures show how early original upright open flame swivel wall brackets have often been converted for inverted mantle operation. In the first picture on the left the whole bracket has been inverted and a standard No.3 burner simply screwed into the end thread. The most obvious inconvenience is the gas tap which is now right at the top where it is difficult to reach and may become hot.

The other two brackets remain their original way up and a formed bend has been added to which the same No.3 inverted burner has been attached. 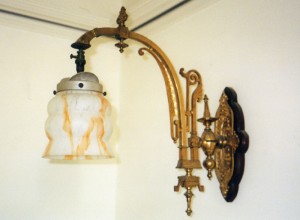 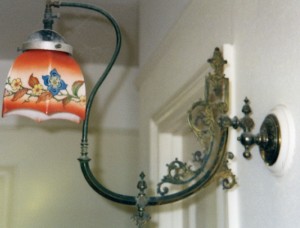 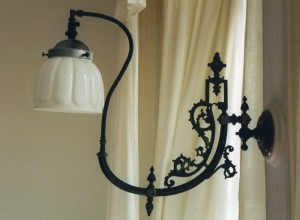 Although this site is essentially for original William Sugg equipment I do receive nice pictures from clients of the later Sugg Lighting company or indeed from clients of my own after retirement when I was looking after the interior fixtures. Sometimes enthusiasts install fixtures that have been carefully removed during a refurbishment and in this case they also provide excellent pictures of gas lighting with inverted No.2 mantles for anyone who has never seen the actual result! 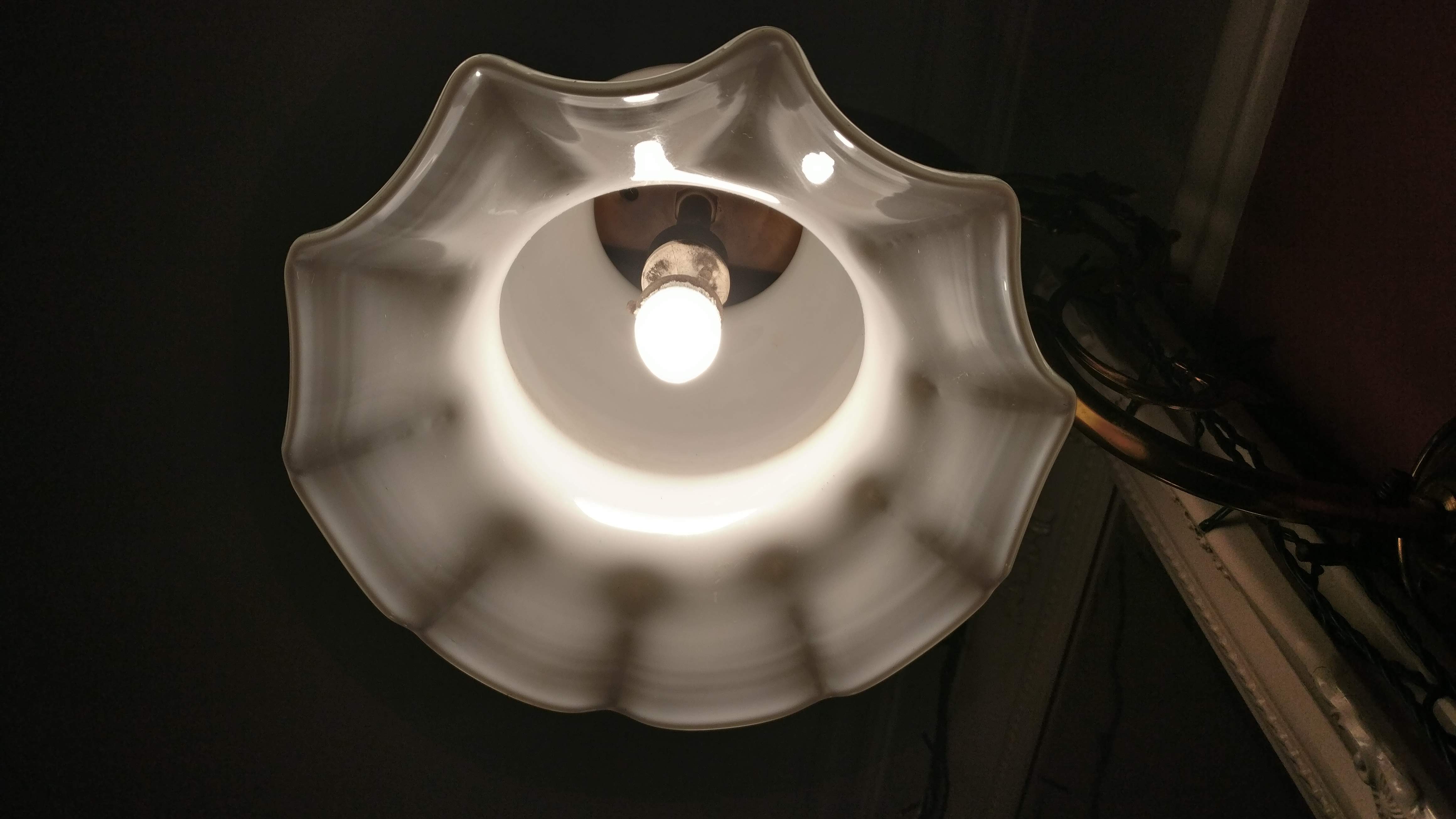 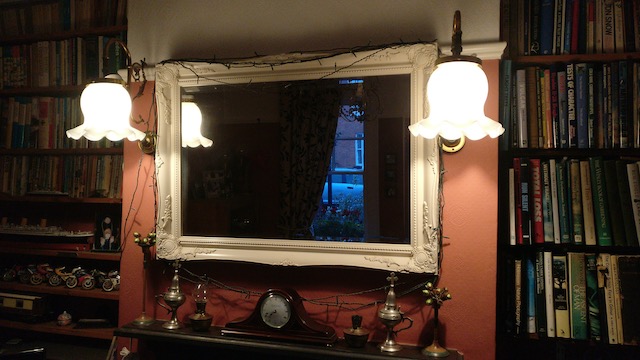 With thanks to Simon Cruse who added, “Everything is working a treat! They give a lovely light and the gentle hiss reminds me of my youth” (Oct 2019) These are our large swan-neck 400 series with decorative addition that were frequently used in commercial premises.