& Other Lanterns designed for the gas mantle

(This is an element of ‘Lighting – Street Lamps‘) 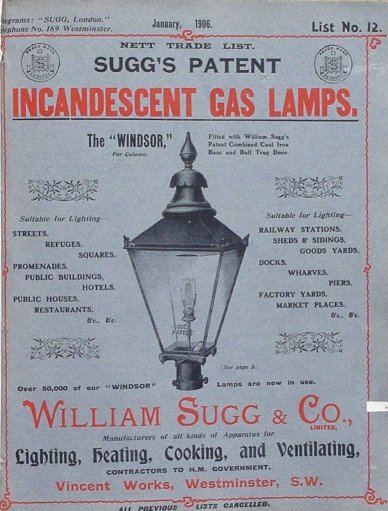 The iconic Windsor Lamp in 1906, 8 years after it was introduced

The 1898 Windsor lamp was the first lantern designed specifically for use with the gas mantle as opposed to open flame. In the early years the Windsor was fitted with upright mantle burners, finally converting to the inverted burner in the early years of the 20th century. We believe that the lamp was named after the place in which it was first used – the Royal Borough of Windsor on Thames. This applies to many, if not all of William Sugg’s most popular lamps.

The extraordinary success of the Windsor lamp is indicated by the statement on this catalogue cover that “50,000 of our ‘Windsor’ Lamps are now in use”. Every manufacturer eventually produced a similar fixture and right up to date, now more than 100 years after this catalogue, the Windsor Lamp is still manufactured by Sugg Lighting, with a version still available ‘in gas’! How many Windsor lamps must have been produced in total?

The Windsor model illustrated above is the first design with both a steeper ‘tent’ or roof than is familiar today and a scalloped ‘cap’. It is also shown here with ‘William Sugg’s Patent Combined Cast Iron Base and Ball Trap Door, with Lever Cock, fitted with Sugg’s Anti-vibrating Incandescent Gas Burner, Mantle and Glass Mantle Protector’. The earliest mantles were so fragile that these burners were provided with a form of spring suspension to absorb vibration from traffic.

Produced in 3 sizes, 14″, 16″ and 18″ (this is the width of the lantern at its widest point) these sizes are effectively the common standard for street lighting and you will find earlier lamps are often of a similar size – before the introduction of the large lanterns described in that section. This particular variant in 1906 is priced from 40s 9d (£2.04) to 71s 3d (£3.56) from the smallest with an 85 candle burner to the largest with two 5 feet consumption burners producing 280 candles. The catalogue illustrates this same lantern sold without a burner for 34/- (£1.70) or, with a standard 4-legged ‘frog’ in place of the cast iron base and no ball trap door for just 28/- (£1.40)! 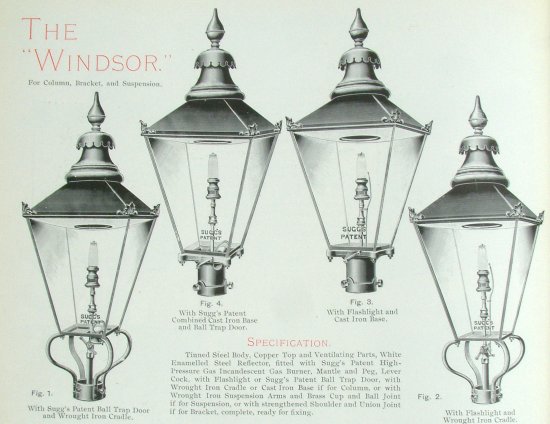 These four Windsor lanterns from the same catalogue have an upright mantle with a patent anti-vibrator designed to reduce mantle breakage. The two on the left have ‘patent ball traps’ in the bases indicating that these lamps are still lit by a lamplighter. The two on the right have permanent pilots so that the lamplighter only had to turn the tap or lever. Not only did this reduce the time taken lighting the lamps but significantly reduced the damage caused by inserting the lamplighter’s torch inside the lantern – in a hurry! 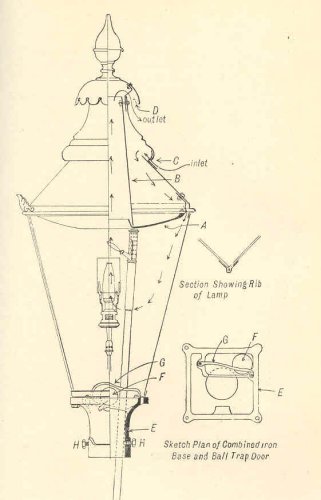 The section drawings also show the elements of the vertical balanced flue arrangement which made the Windsor such a good gas lamp. The body of the lantern is ‘sealed’ either by the ball trap or in later lamps the base is glazed with two glass ‘slips’ either side of a central copper channel through which the gas burner was fed or supported depending upon the burner. The heat and the products of combustion pass up the tapered chimney from the burner and pass out of the lamp under the ‘cap’ which protects the chimney from the rain. The air for combustion is drawn in under the bottom edge of the ‘ogee’ which is the spinning that sits on the ‘tent’ or roof of the lantern passing down around the outside of the chimney and then over the edge of the reflector which is smaller than the frame of the body and so into the body of the lamp. Both of the illustrations above show the internal air movement.

This arrangement ensured that there was no undue air movement, irrespective of the wind conditions, because the combustion air and the products of combustion both entered and left the lamp close together.
The left hand section drawing also shows how in the later inverted burner model the burner was positioned and fed through one corner of the reflector with the airchamber and main injector high up in the lamp.
The ‘tent’ is removable and the reflector is attached to it by means of bent copper tags in each corner. The burner &/or the superheater and the formed piece of burner tube slide onto the nose of the airchamber for ease of removal. 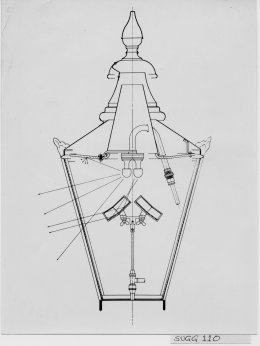 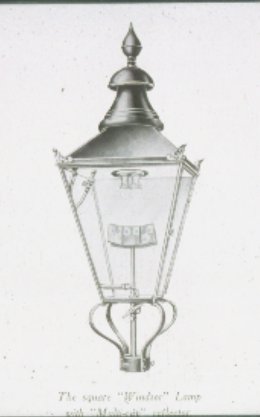 These two illustrations show the Windsor lamp with the later inverted mantle burner and one of a number of later devices to improve lighting performance, the ‘Multiray’ reflector. 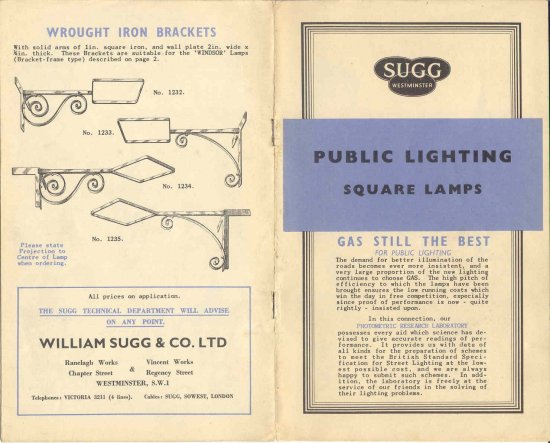 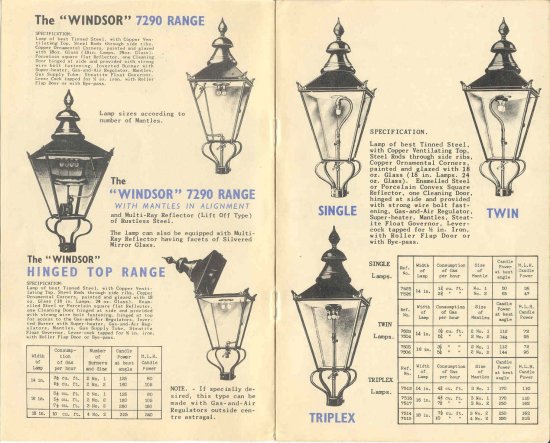 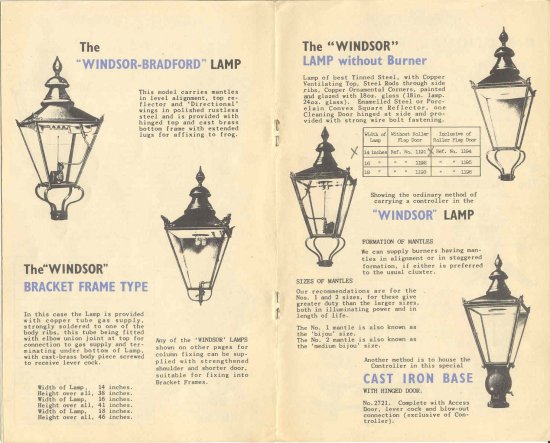 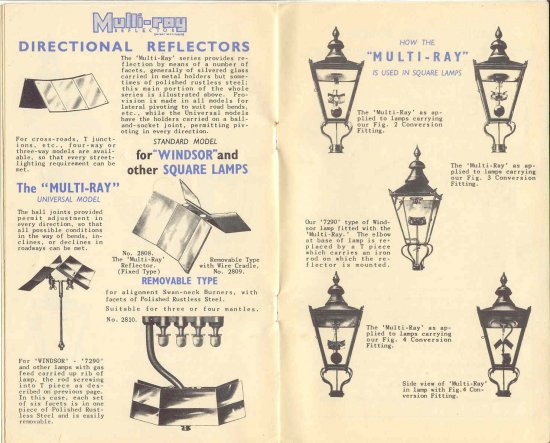 This small booklet printed some 30 years later than the 1906 catalogue pictured at the beginning of this section illustrates how the Windsor has developed over a quarter of a century showing the whole range of Windsor lamps, special burners and devices to improve the performance of existing lamps available in the late 1930’s. You will see that there are just 3 sizes, 14″, 16″ and 18″ (across the widest point) and generally sized ‘according to the number of mantles’. In fact they offered any size with the smallest 1 lt burner but the larger burners required the larger lamp to withstand the greater amount of heat.

Whereas the majority of lamps were post mounted a significant number were also mounted on wall brackets as shown at the top of the leaflet and were called ‘Bracket Frame Type’. By this date the ball trap and lamplighter have both been replaced by a clockwork time clock and permanent pilot.

One model has disappeared altogether from this leaflet and that is the suspension model which hung from a cup and ball swivel arrangement with a down drop to immediately above the ‘cap’ as the ‘spike’ was removed. The supply ran down the outside of the tent and then joined the same externally ‘strongly soldered’ pipe running down one rib to the cast brass body piece shown on the ‘bracket’ model. This type of suspension had been superceded by the Rochester and Littleton suspension lamps which provided shadowless illumination as they have no body frames. See Rochester & Littleton. 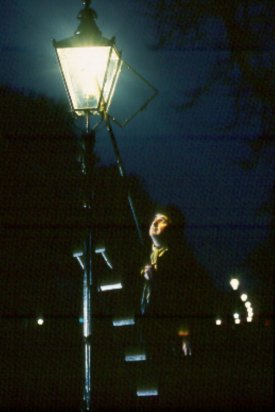 If you think you know your Windsor lamps, what is wrong with this picture?

The answer of course is that this Windsor in Hyde Park has a glazed base which would never have been lit by a lamplighter. As already described and illustrated above, the lamp would have had a ball trap for the lighting torch and of course in bad weather it could be very difficult to light a gas lamp with the door open. Although a ladder was used by some lamplighters it was mainly for maintenance work. The aim of a lamplighter was to get round his route as quickly as possible and opening the door from a ladder is not in the schedule. After the pilot had been introduced to ignite the burner, the lamplighter still had to turn the lamp on and off and became adept at using a pole with a hook to turn the lever cock on or off whilst riding past on a bicycle! 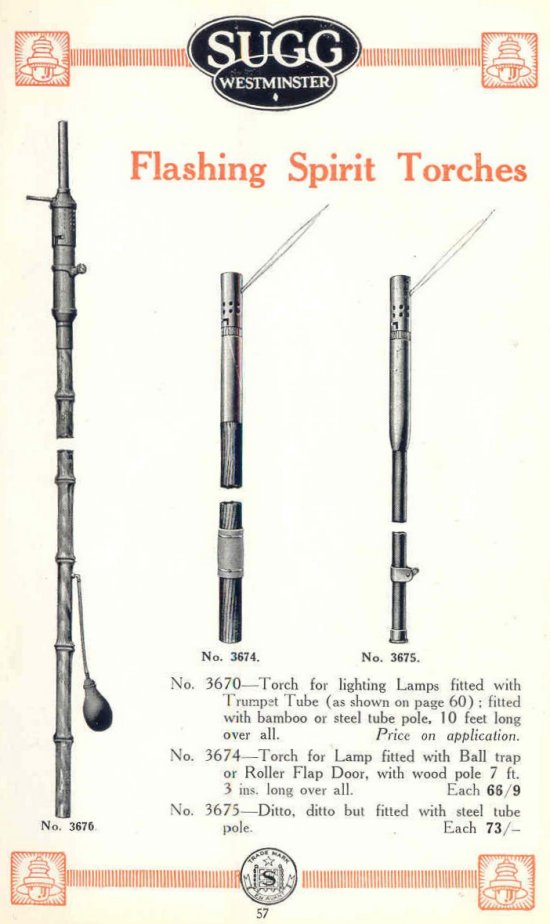