(This is an element of ‘Lighting‘)

This is a poster drawing of the range of William Sugg street lamps and matching posts from around 1880. All the lamps have open flames at this date and the posts are both decorative and substantial to match the scale of the lamps. 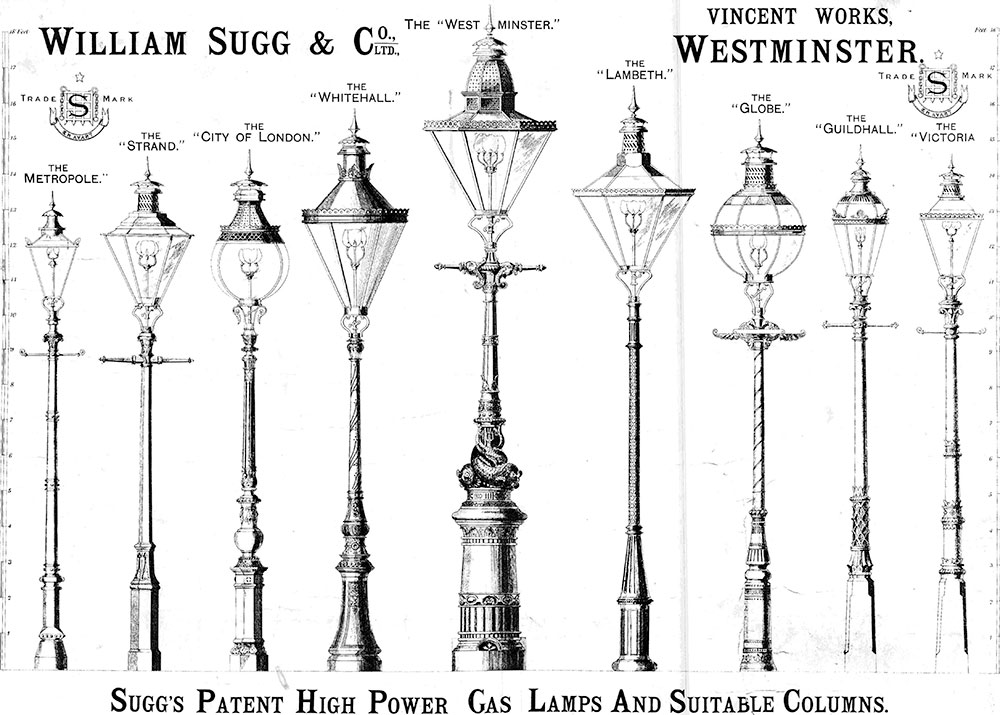 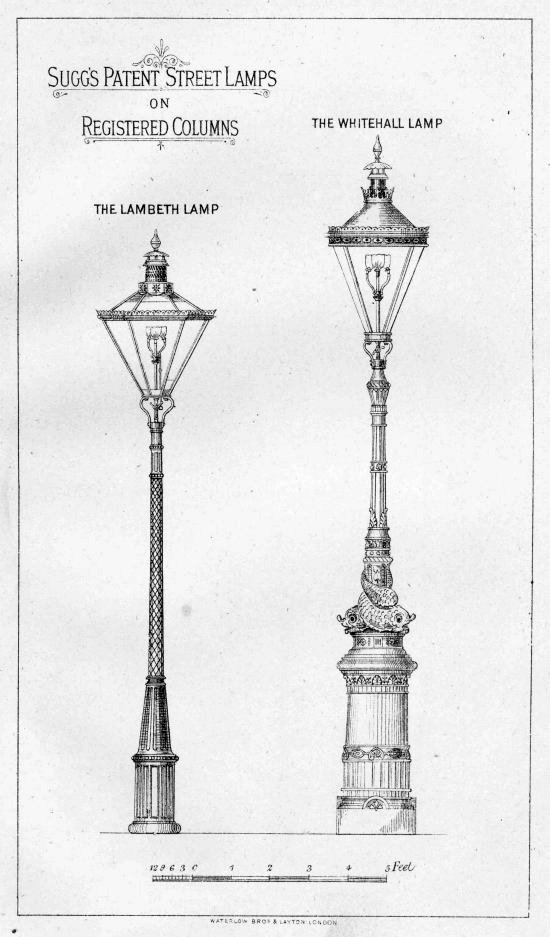 This illustration taken from William Sugg’s book “Modern Street Lighting” first printed in 1871, indicates the care and detail that went into every product that came from the Sugg factory and foundry. Londoners and those who have walked by the river Thames will perhaps recognize the main shaft of the right hand post with its twisted fish design which matches the magnificent pedestals still mounted on The Embankment wall with Globe Lamps. These Globe Lamps are shown in the Street Lantern section under ‘Lighting’ as are both the Lambeth & Whitehall on the posts above. The left hand post was a popular design available in no less than 4 sizes as a single post and 3 sizes with a triple head and an even larger variation 16, 18 and 20 ft tall. At least one good example exists in Hyde Park and it carries the Sugg ‘En Avant’ (In Advance) logo as shown below. 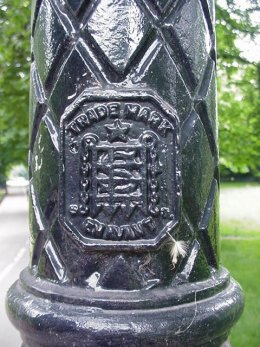 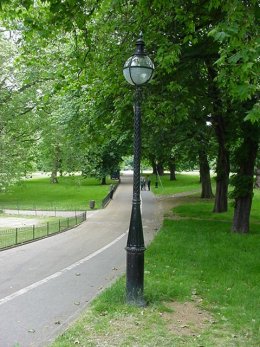 Although it may look unlikely from the photograph, if you find this post in the centre of Hyde Park quite near ‘Ranger’s Lodge’, you will discover that it is surprisingly large. The point where the tapered section meets the diamond pattern shaft is the best part of 6ft off the ground! 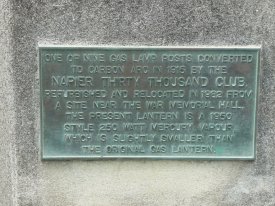 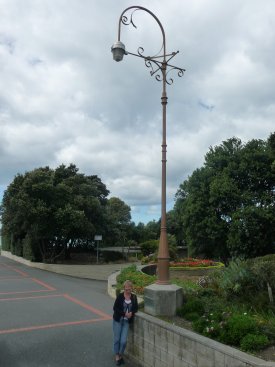 The two pictures above show another of these Sugg posts, this time in New Zealand which, according to the plaque is “one of 9 posts converted to carbon arc in 1915” (You can just see William turning in his grave).
Although the same pattern as the Hyde Park one it is considerably smaller and you can also see the extension added to the original post before the somewhat butchered 4-way cross at the top. (Pictures courtesy of Peter & Jenny Webb) 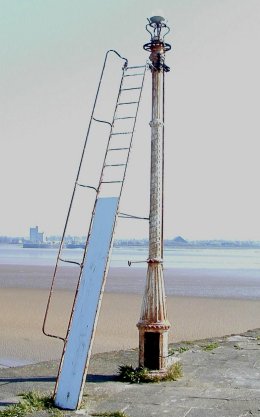 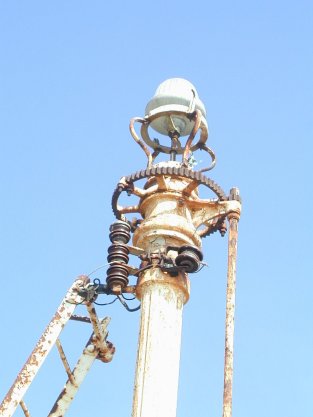 Here we have another ‘find’. This extraordinary post is clearly the same design as the others. It was found at Lydney Harbour on the river Severn where it acted for many years as a warning light. In the close-up you can see the remains of a circular lantern base on a typical 4 legged mounting ‘frog’. 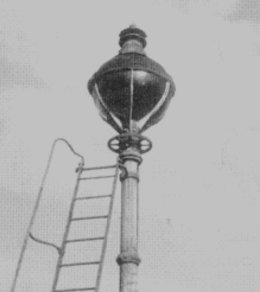 An archive picture indicates that this was a globe lamp with part of the glazing blacked out. In its original gas lit state the open flame burner would have been mounted rigidly on the gas pipe passing up the post. Ignoring the crudely added electrical insulators, presumably from a later overhead wiring addition, the wheel and pinion are driven by a shaft passing up the outside of the post from a crank handle. The ladder was obviously mounted permanently to enable the operator to clean the lantern glass and attend to the burner – maybe even lighting it every time it was required – in this clearly exposed location. Exactly how and when it was operated has not been discovered as yet but by rotating the lantern with the crank the light could be made to flash across the harbour in the same way as a lighthouse. Under what circumstances this manual operation was used is unknown although fog seems to be quite likely — but perhaps somebody who reads this might be able to

‘shine some light’ on the mystery!

A 2013 correspondent pointed out that this post has a door which I had never taken on board! It is significant because I have never seen a door on one of these posts or, indeed, on any original Sugg gas post – in fact it is the first feature that provides an answer to the gas or electric question on any post. This particular installation on a stone built harbour wall must have presented some gas supply and connection difficulties and it is possible that a door was made specially to allow for this. I am surmising that the ladder was made permanent because the lamp was only lit when the weather was particularly bad. However, because of the ladder, anyone could have interfered with a ‘normal’ gas tap just under the lamp, so perhaps the base compartment was made to hide a further supply main cock.

The later overhead electric supply must have been particularly dangerous being easily in reach from the ladder so perhaps it too had a remote switch?

The picture below was brought to my attention by M.Ara of Lumiere de l’oeil as of course it shows the same lamp and post on either side of a harbour entrance. Although the ‘rotating’ mechanism is not present the glazing is almost certainly coloured red and green for port and starboard to guide incoming boats through the entrance. 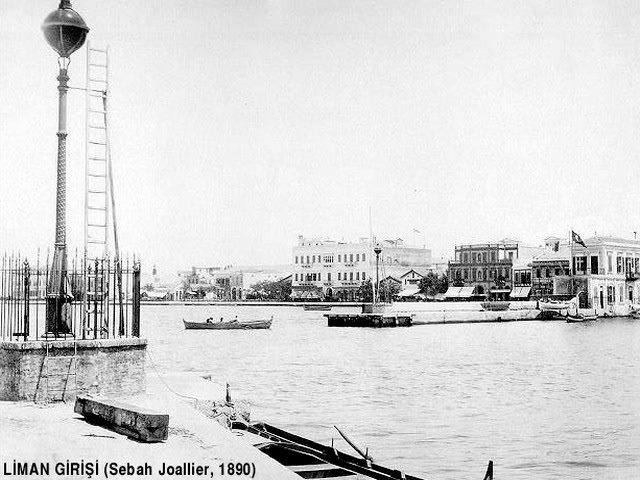 Location Eastern Mediterranean.  Izmir, Thessalonika, Gallipoli? Only Izmir had a gas works I am told but of course it is possible that these lamps were not gas. In addition I don’t think they are identical to the Lydney Harbour one although similar. The mounting is clearly different and there is no obvious gas pipe, just a 3 legged ‘frog’. The post is definitely the same, however! 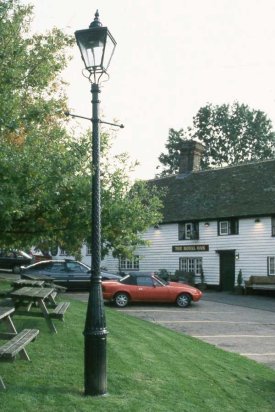 Finally, on this obviously very popular Sugg post, these two pictures show other extant originals, on the left at Marlborough College with a horrid electric adaptation and on the right, more at home perhaps, in the car park of The Royal Oak public house!

And for one final reminder of the age of these posts – see below. 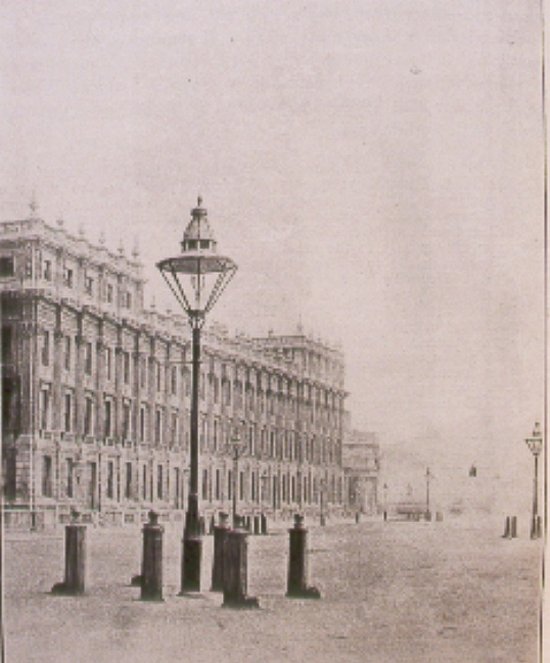 This classic photo illustrates the huge Westminster lanterns in Whitehall with their open flame burners around 1880 mounted on the same design post. 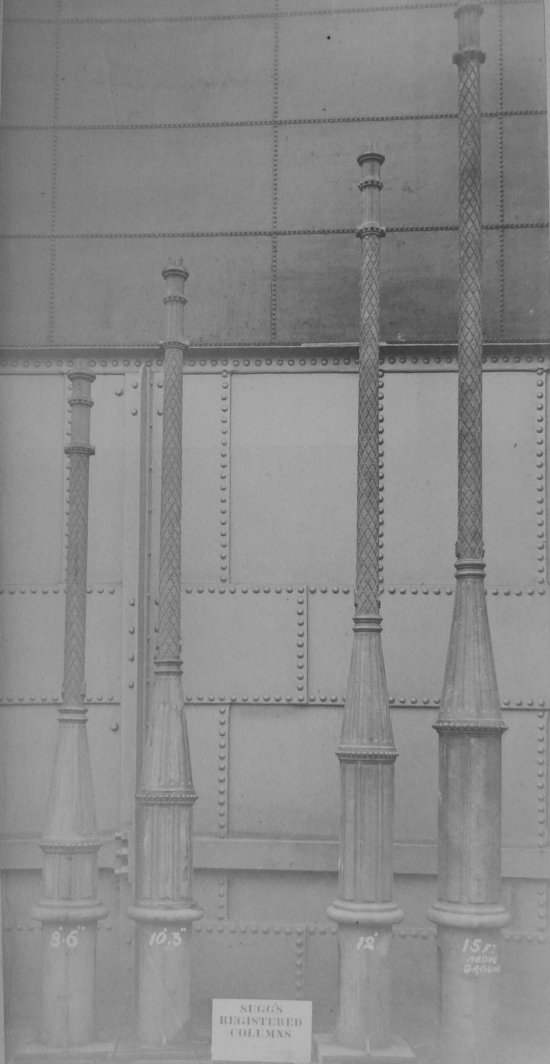 The advertising picture above shows 4 versions of the same post 8’6″, 10’3″, 12′ & 15ft ‘from ground’. This picture was taken in the back yard of the Westminster factory which backed onto the Gas Light & Coke Company gas holder which provided a convenient background. In other large pictures a piece of canvas is hung from the holder to provide a ‘plain’ background!

Many of the very decorative cast iron posts dating before about 1900 are extremely large because of the huge lanterns they supported. As explained in the section on Street Lanterns but worth repeating here, the lanterns grew progressively larger with the demand for more light because the only way to achieve this in the days before the invention of the mantle was to fit larger or multiple flame burners. The heat from these burners was sufficient to melt the solder that held the copper lanterns together if they were not large enough to allow for sufficient air movement to keep the temperature under control. 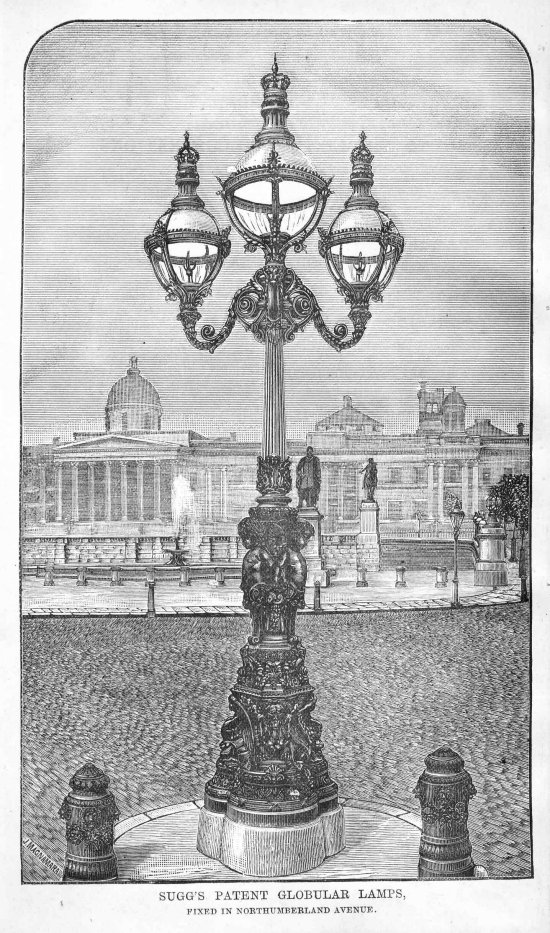 This magnificent column is one of two still in their original location at the top of Northumberland Avenue, albeit with the later Parkinson High Pressure lanterns recently refurbished and electrically operated (see below the text). The accompanying note from the Metropolitan of October 27th 1883 provides interesting detail as follows. 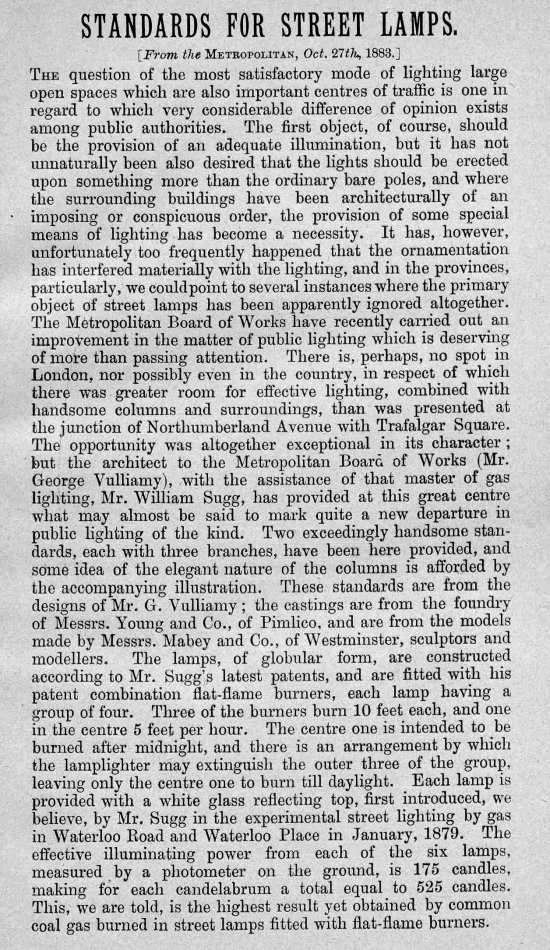 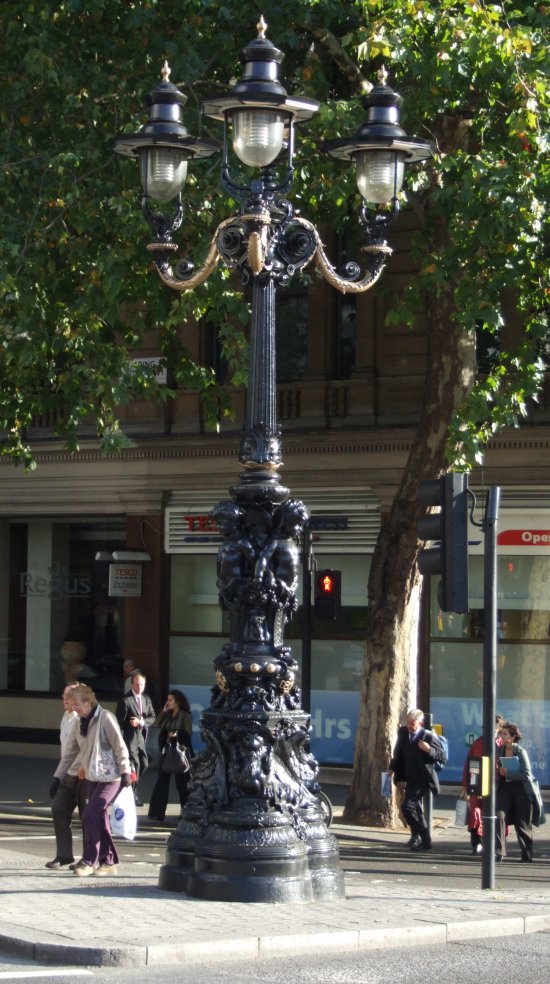 This is the same magnificent column photographed September 2007. The original globe lanterns were replaced by Parkinson high pressure lanterns which remained in place long after they had stopped working and have only recently been tidily refurbished and converted to electricity. The second post is near Admiralty Arch at the top of The Mall. 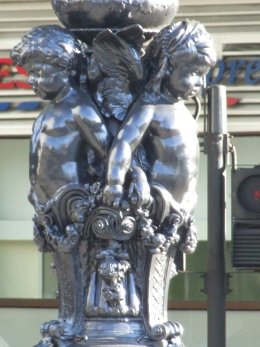 The ‘cherubs’ around the centre of the column have been coyly linking arms for
124 years (in 2007)!

There are also some delightful pictures of posts being installed on Blackfriars Bridge. Whilst the posts are not Sugg, the lamps, which are London Lamps, certainly are and the ‘manual’ form of installation shows how things have changed. These pictures are in the section which includes the London lamps. Click and wind down.

Top of page
or
Back to ‘Lighting‘