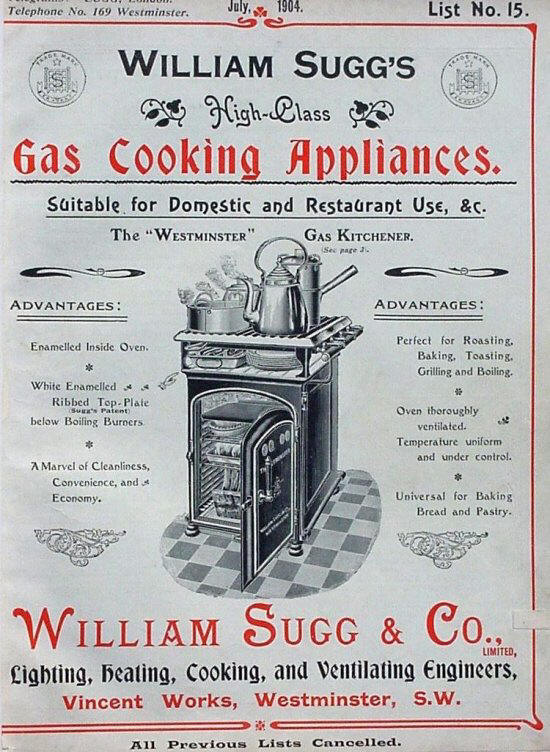 The illustration above is the front cover of the July 1904 Gas Cooking Appliances catalogue for domestic and restaurant use. Although we are now looking at a date close to the end of William’s life in 1907, the Sugg cooking products had grown in size and stature throughout his long stewardship of the Company. The earlier years had seen many unusual products. As long as it could be run by gas there was no limit to the number of products designed to help the amateur and professional cook in the development of their skills.

After Lighting, Cooking was probably William Sugg’s greatest passion. His French wife Marie Jenny even wrote a book called “The Art of Cooking by Gas” which was published in 1890 and is liberally provided with Sugg adverts! See below the Parisienne Roaster for more details and the review by Punch Magazine. 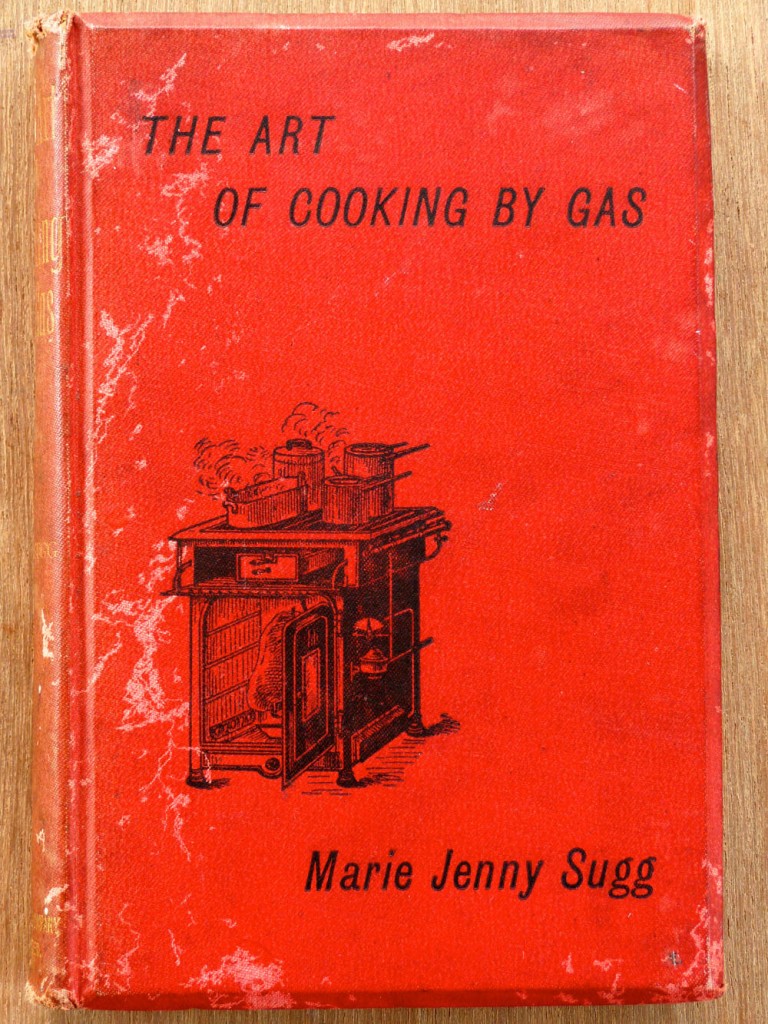 In the early catalogues a major aspect of the sales effort was to obtain feedback, something which is very common on websites today but rarely seen in advertisements. It has a somewhat quaint feeling but, with products that may well have been unique in their time it was obviously important to obtain a quote from some important or well known source or person. Probably the classic of its time was the following that appeared in 1888 in a lead up to one of Williams famous descriptive essays on his products, the first couple of paragraphs of which are reprinted below ending with a somewhat unique French ‘proverb’!

A NEW AND IMPROVED METHOD

OF APPLYING
G A S
TO

Of the uses to which gas can be put in promoting domestic comfort, one of the most interesting to housekeepers is un­doubtedly that in connection with the preparation of food. In these operations rich and poor alike will find its aid in­valuable in point of economy as well as in readiness and certainty.
To those who, like the author” of this paper, have been for many years accustomed to eat food cooked entirely by gas, it is a matter of surprise that it has not been much more extensively adopted by the general public. For roasting, when used with the apparatus described in this pamphlet, it is unrivalled; and where joints cooked to perfection by gas are compared, on the points of flavour, juiciness, appearance, and weight, with those roasted, under the superintendence of a pro­fessional cook, before a coal fire, it will be found that the gas-cooked meat will suffer nothing by the comparison. Roasting is considered by gourmets to be an operation so difficult to perform successfully, that

“One becomes a cook, but one is born a roaster.”

And this is part of the product description:

One great principle in the construction of Sugg’s Patent Roasters, Grills, and Hot Plates is the employment of luminous flames and jets of gas exclusively. Another great principle is the making of the burners of Steatite, a natural stone, which is indestructible by heat or damp, incorrodible, and harder than the hardest steel. A third prin­ciple peculiar to Sugg’s system is the adaptation of a self-acting governor to each piece of culinary apparatus, be it roaster, oven, grill, or hot plate, so that the temperature of these can be perfectly adjusted and maintained at any desired point by the cook. There is also a small flash-light to each burner, which renders unnecessary the use of matches or lighted paper during the operations. The inside of the ovens, roasters, and grills are enamelled white. 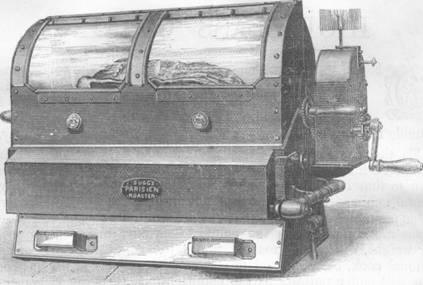 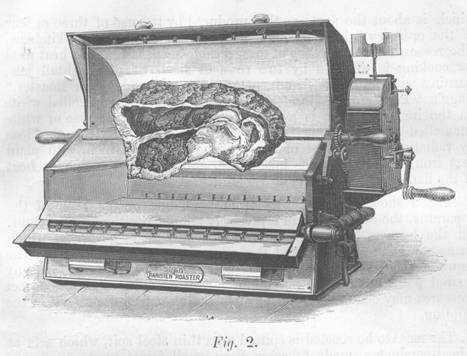 The combination of all these principles with the improved form of roasters, grills, ovens, boilers, and braisers constitutes an entirely new method of cooking by gas. Figs. 1 and 2 show Sugg’s “Parisienne ” Roaster ~ respectively open and closed. This Roaster is a greatly improved model of one which has been in daily use by the author for many years. In the operation of roasting it has always been placed on the kitchen table, without any flue or communication with the chimney. No smell is produced by this simple method, except the agreeable odour of roast meat when nearly done. No ill effects of any kind whatever have ever resulted from the products of combustion (carbonic acid largely diluted with atmospheric air), the quantity of which is about the same as that produced by the use of three or four of the ordinary fishtail burners, such as are employed in kitchens. The reason for the absence of disagreeable smell is that the heat used for cooking is afforded by two rows of small Steatite fishtail jets, burning with luminous flames, one row on each side of the Roaster.* Sugg’s “Parisienne” Roaster is made in cast iron, enamelled white on the inside. There is a very great advantage in the use of white enamelled cast iron ; it is easy to keep clean, prevents the loss by radiation of the heat of the roasting-chamber which, with plain cast iron, would otherwise take place, and reflects the radiant heat of the flames on to all parts of the joint.

* The pioneers of cooking by gas-James Sharp, of Southampton, William King, of Liverpool, and Ebenezer Goddard, of Ipswich-always used luminous jets of gas. The celebrated chef, Alexis Soyer, roasted a bullock whole, at South Kensington, by gas, with an apparatus very similar to the roaster described. A propos of roasting bullocks, the records of St. Margaret’s Church, Westminster, tell us that Anthony Sugg (an ancestor of the author) roasted a bullock whole on the Thames, during the great frost. It does not, however, say that he did this with the aid of gas. His present descendant, if required to do the same thing, would certainly use gas.

It is interesting to note that this piece indicates that William had personally been using a ‘Roaster’ for many years. His wife, Jenny, came from a Parisian family, by the name of Fleurot and family lore says her father was a chef. By the date of this pamphlet in 1888 their family would have grown to 10 with 1 on the way, so the comment about ‘using the roaster daily’ can be fully appreciated!
The additional comment in the asterisked note about Anthony Sugg roasting Ox on the Thames fails to mention the date of the ‘Great Frost’ which was 1683. This claim is stated on the burial certificate from St Margarets’, Westminster, Book No.8 in the reign of Queen Anne, although I have so far failed to make a direct family connection in my genealogical adventures!

Jenny Sugg and The Art of Cooking by Gas

With her father as a chef and her husband as an inventor and manufacturer of gas cooking appliances, it is perhaps not surprising to learn that Jenny Sugg wrote her own cookery book. Sprinkled liberally with Sugg cooking appliances it is probably the first book to have been published with solely gas cooking in mind. This was how Punch Magazine greeted it:

Among the Arts for obvious reasons not known to Ancient Greece is _The
Art of Cooking by Gas_. In a little book under this title, published
by CASSELL, Mrs. SUGG has undertaken to disclose its mysteries, and
set forth its attractions. No one could be better qualified for the
task, since Mrs. SUGG is the wife of WILLIAM SUGG of Charing Cross,
who has thrown more light on Modern London than CAMDEN did on its
ancient ways. Cooking by gas, Mrs. SUGG shows, is cleaner, cheaper,
more convenient, and more artistic than the older style. So widely
is the practice now established, that gas-cooking apparatus are made
to suit all conditions of life, from the kitchen of the Grand Hotel
to the “Little Connaught,” which you can (if you like) carry about
in your waistcoat-pocket; yet when properly extended it will roast
fowls, and small joints, grill chops, steaks, and fish, boil eggs,
and vegetables, and keep a large family in hot water. “To gentlemen
residing in Chambers, or those reading for the Bar,” Mrs. SUGG writes
of another treasure, “this little kitchener with the two grillers will
prove a great boon.” If Sir HENRY JAMES had really been going to the
Bench, he could not have done better than study this book, and set
himself up with a “Little Connaught” or a “Double Griller.” Since
that is not the case, it may be asked, Would they be worth the LORD
CHANCELLOR’s attention? We unhesitatingly reply, “Why, Sugg’nly!”