(This is an element of ‘Heating‘)

The Opening to Another Age

In 1967 a paper was published by The London and Southern Junior Gas Association entitled:

This section has been based almost entirely on the above paper which is commended to anyone who wishes to study the development more closely.

Ray Hentsch was employed in 1964???? by Technical Director Crawford Sugg (PCS) who was aware of the need to diversify the product line of the Company, now fully located in Crawley. The manufacture of the ‘Halcyon’ warm air heating systems had been very successful and even reached a manufacturing quantity of 1000 units per week (see ‘warm air heating’ section). Although there were other gas products in manufacture, many had been conceived immediately after the war years and some, such as a few remaining gas lamps dated back to the 1930’s. The gas fire development had been largely overtaken by the competition and something new was required.

Ray Hentsch had had a long career in instantaneous water heating and was personally convinced that there was still a future to an appliance that had a venerable history. William Sugg had manufactured the “Boiling Stream Therma” invented and patented by A.G.Vernon Harcourt in 1882. (See ‘Water Heating pre 1900’ section). The huge advantage of gas over electricity that made fast heating possible, was the amount of heat that could be provided through a relatively modest and economical supply pipe and the method by which gas could be stored such that demand could be varied. To achieve anything like the amount of heat release using electricity would have required much larger and more expensive supply cables and there is still no easy way of storing electricity to allow for big variations in demand. Only in very recent years has a viable electric shower heater been produced and that, largely, at the expense of high volumes of water.

In the paper Ray lists 11 important developments of the instantaneous water heater after the war with approximate dates. These include thermostatic control, multipoint, side outlet draught diverter, water and gas governors, temperature control, finned heat exchanger tube and even a fan assisted balanced flue developed to prototype stage by J.H.Robinson & Co Ltd. He goes on that “these stages plus the knowledge and experience of the industry has made it possible for designers to provide water heating appliances which are capable of operating with very high heat inputs”.

This is the stage at which Ray started his development. Realising that a high input in a compact appliance necessitated the removal of high volumes of combustion products the only practical answer to achieve this was by using a fanned flue system on a balanced flue.

(For those non-technical readers or those who wish to know a little more about the aspects of gas combustion and ventilation read on!)
Gas needs oxygen to burn and produces a number of products of combustion of which carbon dioxide is the most significant. The most familiar method of removing combustion products is by the use of a chimney as with a conventional fireplace, however, the provision of air for combustion has to come from the air in the room. As building construction has become ‘tighter’ it has become necessary to provide specific methods of channelling air for combustion directly to the gas appliance. At the time of conversion to natural gas many house owners were surprised to find large holes made in their outside walls to allow air for combustion generally into the house. To overcome all these problems the gas appliance designers developed the ‘balanced flue’ in which the appliance was effectively enclosed in a box which was normally mounted on the outside wall with one connection to the outside air for combustion air and one for the flue products. Because the effect of wind on an outside wall can be significant to these movements, the adoption of a fan to ‘force’ the air movement especially for large volumes becomes an essential requirement. The principle of the ‘balanced flue’ goes all the way back to gas lighting and is described in the section under Lighting, Street Lamps , Windsor Lamp. C.S.

“The early tests on a converted instantaneous water heater showed that, in addition to being able to use a very small flue system, the heat input could be almost doubled. Unfortunately the control of the gas and water flows and the fanned air were difficult to combine, the air movement round the burner needed closer study, it was difficult to obtain a low noise level from the fan and the design of a suitable heat exchanger having a long service life needed investigation. The development work covered a number of years during which the central heating market was expanding rapidly. A decision was taken to change the initial purpose to which the development and thought had been directed, towards a combined appliance for central heating and domestic hot water supply”.

“The pattern of usage of central heating systems had changed with the widening of the market and the inclusion of consumers who wished to operate their systems for reasonably short periods for both economy and the fact that there would be nobody in the house during a large part of the day”.

This mirrors one of the development aspects of the Halcyon warm air systems from almost 20 years previously when there was in effect no central heating market other than for major estates and large houses. Warm air provided quick response to the areas in use rather than attempting to heat the whole house, and very economically. CS..

“The development of a number of prototypes is described in detail in the paper. The co-operation of the Development Division of Watson House with a series of tests on the performance of the prototype is applauded. A number of appliances were manufactured for ‘district tests’ during the autumn of 1966. The valuable assistance of the Development and Marketing Committees of the Gas Council in obtaining the co-operation of the area boards in this test is also noted”.

“The development work on the towns gas model was nearing completion when the industry was confronted with the possibility of large quantities of natural gas becoming available from the North Sea. The decision that all new appliances should have to be of the bi-gas type therefore necessitated a further development programme. In due course a Dutch ‘all gas’ burner was selected and within a few months a further prototype was submitted to Watson House. Further work on the balanced flue terminal eventually achieved a flue system which could be fitted in three different directions complying fully with the requirements of B.S.1250”. 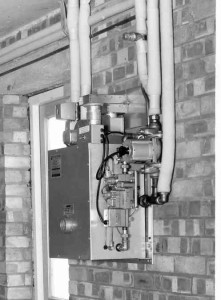 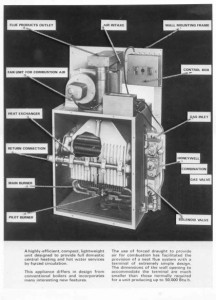 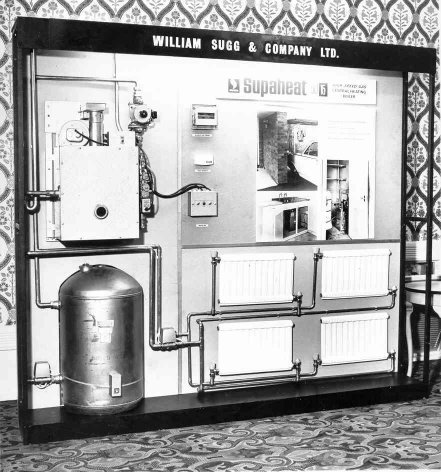 The low water content principle has probably been the single most important development in the world of domestic central heating in the 20th century. Every manufacturer has followed the lead of William Sugg & Co Ltd and many variations on the theme have been developed. Once again William Sugg led the world and, apart from the prototype of a warm air heating appliance known as ‘HERO’ this was the last development of one of the most famous gas appliance manufacturing companies before they succumbed to a takeover in 1969.

A History Worth Recording