(This is an element of ‘Lighting – Street Lamps‘)
This title is no exaggeration! Many of the fixtures discussed here top 6ft or even 2 metres in height and 4ft 6in across, often hexagon, octagon and even 12-sided in section! And the reason — without this huge size the whole frame would have collapsed because the soft solder that holds the majority of the lantern components together would simply have melted under the temperature produced by the multi flame burner. (See burner pictures in Lighting/Burners/Open flame.)

The invention of the gas mantle, radically changed the size of lanterns because the same amount of illumination could be achieved with a tiny proportion of the gas consumed and thus the heat was reduced dramatically. The large lanterns came to quite an abrupt end and that is why they are so rare today. They are, however, a notable feature of almost any contemporary photograph of street scenes, especially in London. 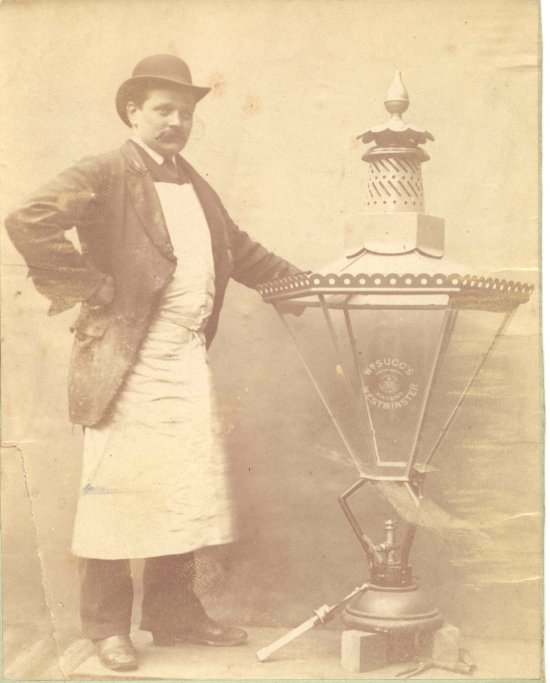 Workman about to fit twin open flame burner (laying by his feet) for gas test on a Lambeth Lantern. (Note the etched logo)

If you would like to see one of these now very rare lamps, there is one in near perfect condition on a window ledge in a church in Devon, (2015)! To see a picture and read the story about this discovery, go to ‘Location Pictures’ and wind to the bottom. 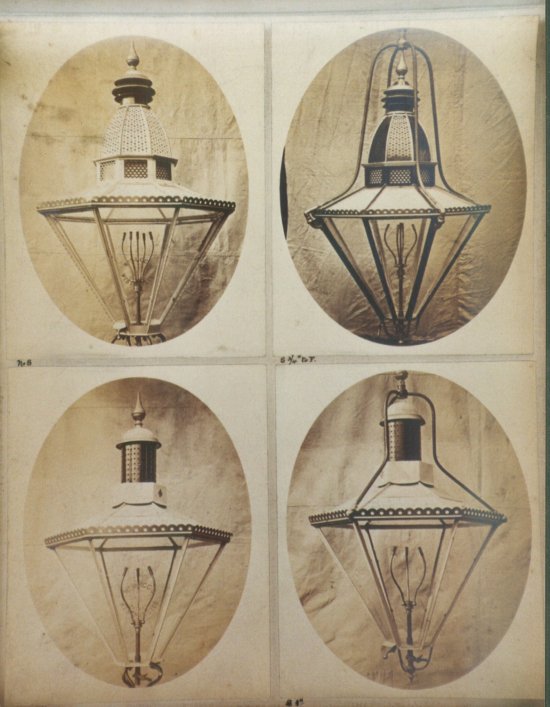 Post mounted and suspension versions of Westminster (top) and Lambeth lanterns. The Lambeth appears to differ from the one with the workman in the chimney section which appears a little longer and pierced rather than slotted and carries a plain spun cap and spike as against a scalloped cap and spike. 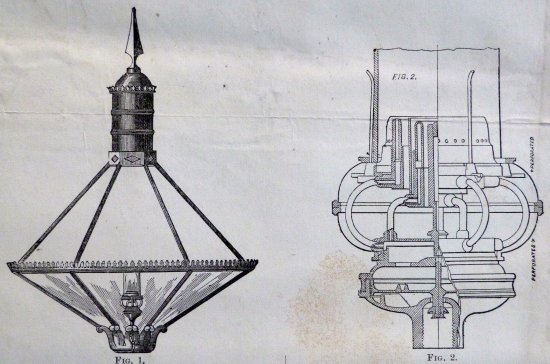 This illustration of a very large early lamp, similar if not identical, to the lamp in the right hand picture below. The multiple ring argand burner is shown in close-up. 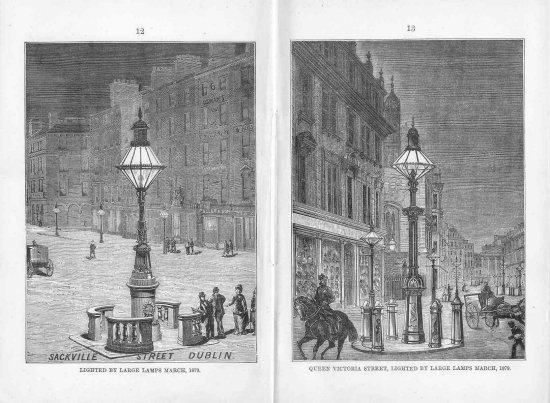 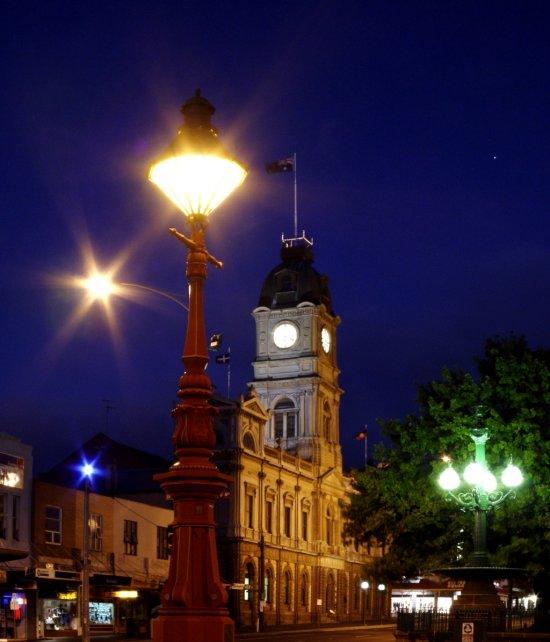 This is a recent (2006) photograph from the Sovereign Hill area of the historic town of Ballarat in Victoria, Australia, not far from Melbourne. It carries a number of Sugg lanterns including these replicated 12-sided lanterns – the oldest design of Sugg lanterns still in use – and clearly the same as the ones in the book illustration 128 years earlier.
Unless someone knows better!
The picture above is by courtesy of David Morrison who is a professional photographer in the area and was photographing heritage items. He was familiar with the word SUGG but didn’t know ‘what it meant’ so turned to the internet – and the rest is history – literally!

The challenge just above to find something older caught the eye of researcher Arthur Brook who visited Ballarat in 2009. He also sent me a nice photograph and the following update on this “Sugg heritage site” on the other side of the world!

“Lydiard Street also contains some introduced replica gas lamps which were constructed in the 1980s by the City of Ballarat to replicate the early street lighting. The lamps and placement of lamps were based on the early street lighting. The one original surviving street lamp outside Craig’s Hotel has been recently removed due to damage. Two large cast iron “Sugg” lamps were also introduced in the centre of the intersections of Lydiard and Sturt Streets and Lydiard and Dana Streets as part of this project. The design and placement was based on early photographic evidence.”

In addition to the photograph above Arthur also sent me the following:

(Also recorded in the medals list under ‘History’ q.v.)

The Argus Friday 8 April 1881 Page 3
COUNTRY NEWS. BALLARAT At the first trial of the new large Sugg lamp on Tuesday night—the site of which has been the subject of so much controversy of late—the glass which confines the light was broken, apparently by the sudden change of temperature, in turning down the light too quickly and as there are no spare glasses of equal capacity to be got the lamp, which is of 400 candle power, will have to be utilised as a 200 candle power until the required glasses can be procured.

The Argus Wednesday 8 June 1881 Page 5
Some time ago the City Council of Fitzroy communicated with the City Council of Melbourne with a view of erecting a large lamp to test the electric light for street lighting purposes at the intersection of Brunswick Street and Victoria Parade. The Melbourne Council however declined to co-operate with the Fitzroy Council on the ground of expense. Since then the council agreed to erect a gas lamp and this having been done the lamp was lighted for the first time yesterday. It is one of Sugg patent lamps on a post l4 ft high, the globe being 3ft in diameter whilst the light is equal in power to 200 candles. Such a lamp was greatly wanted at this spot.

(Fitzroy is a suburb of Melbourne)

The Argus Wednesday 14 December 1904 Page 8
COUNTRY NEWS. BALLARAT AND DISTRICT. The city council is trying the effect a new 2,000-candle power electric light which is stated to cost £20 per annum. Each of the 3,000-candle power Sugg lamps at present in use costs £30 per annum.

The Ballarat Information Centre publishes an illustrated booklet on the Heritage Walking Trails which includes several pictures and photographs of Sugg fixtures. They also have a website www.visitballarat.com.au (As at 2010).

The following comment was sent to the website in 2015 and I thought worthy of addition to the text as it gives up to date information on Ballarat. Thank you Ken!

I have just come from Ballarat and the Sugg lanterns are in the central business district some 1.8 to 2 kilometres from Sovereign Hill. The lanterns in the 2006 photograph are at the intersection of Lydiard and Sturt Streets, while the 2009 photograph is at the corner of Dana and Lydiard Streets. Another stands at the corner of Sturt and Grenville Streets, all these are readily seen on Google Earth Street View. I was unable to see what type of burners were in them as the glass of one is darkened and the others are too exposed to traffic to get close enough.

While the tourist area of Sovereign Hill does have some old style street lanterns, they are probably reproductions made since 1970 when the place opened. Original street and park lanterns from the 19th century also can be found at Bendigo, which was vastly richer in gold, but none that I saw were as elaborate as the lanterns in Ballarat. 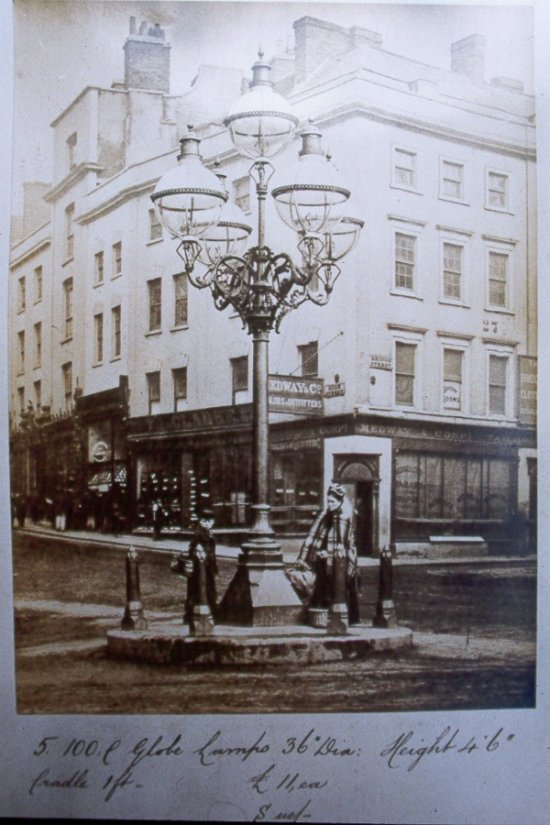 Another fantastic photograph of a cluster of 5 huge Sugg globe lanterns 36in diameter, 4ft 6in tall with 100 lt burners. 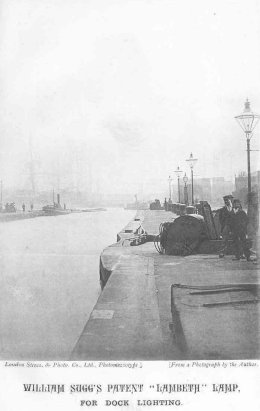 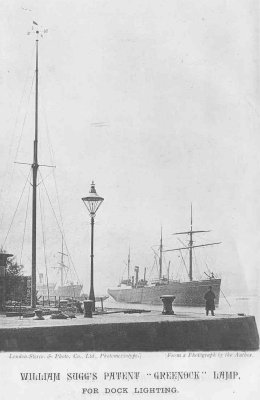 These two pictures of dock lighting by the Lambeth and Greenock lamps appear in William Sugg’s 1887 book ‘Modern Street Lighting’ and are credited as being by the author – clearly an enthusiastic photographer. Once again they demonstrate the enormous size of these lamps. The Greenock lamp is mounted on the largest 20 ft version of the popular ‘diamond pattern’ post. (See columns and brackets.) 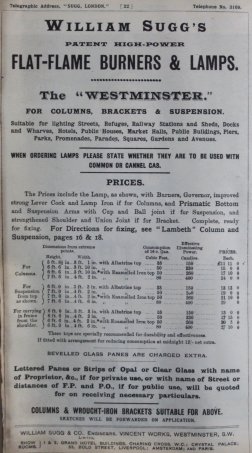 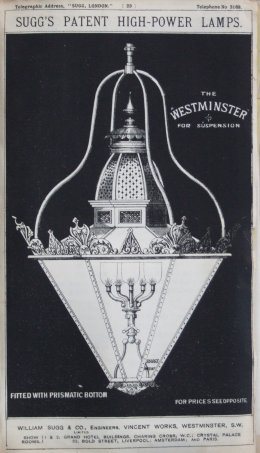 These (1880) catalogue pages illustrate the Westminster lamp in one of it’s earliest open flame forms, shown here suspended. This specific model is listed opposite with the largest 80 cu ft, 400 candle power version priced at £29.00 being 7ft 6in ht and 4ft 6in width! 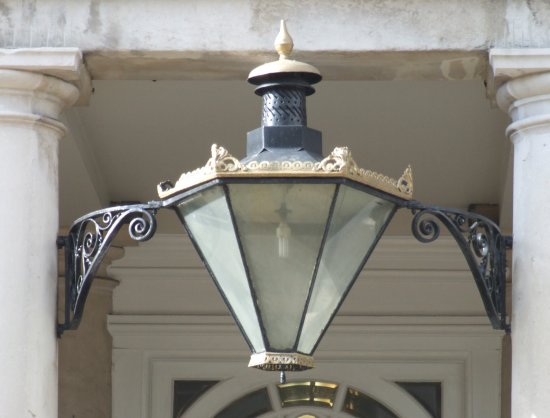 This Lambeth lantern still (2014) graces the entrance to the council offices in Lewes, East Sussex. With it’s handsome cradle bracket it makes an impressive statement of the longevity of Sugg lanterns – somewhat more impressive than the feeble low energy electric lamp now providing the light source!

Apart from this great example of the Lambeth lamp still installed in its original cradle mounting in Lewes, another Lambeth lamp that used to light the street in the village of Beer in East Devon has been saved for posterity in the unlikely location of the parish church of St Michaels. The full story is in Location Pictures but a picture is shown here to keep the Large Lanterns theme in place. 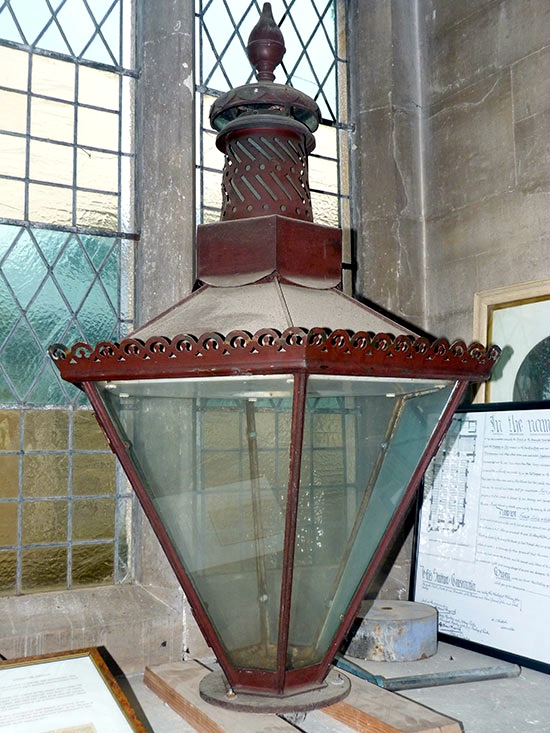 In 1988 at Sugg Lighting we found what we believe is the largest original Westminster lantern still in its original location on the cliff overlooking the pier in Llandudno. It had survived something like 100 years in this incredibly exposed location partly because it had been provided with an extra support frame although it was truly suffering as can be seen in the picture below. 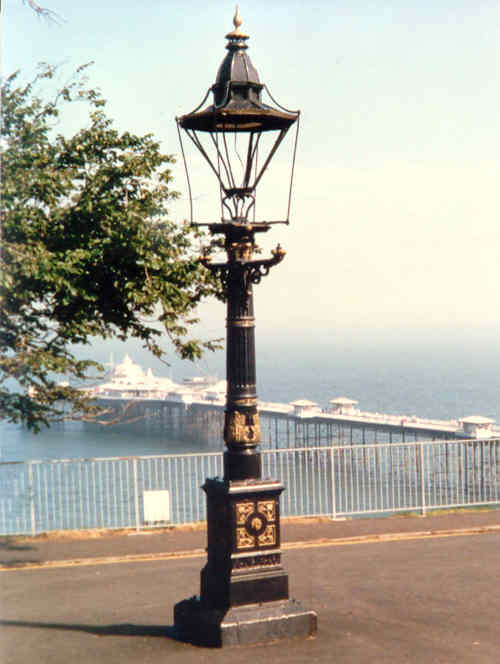 We were able to recover the Westminster, strip it down and rebuild it. You can see just how large it is in the picture below ready to be returned. (The lamp is accompanied by Chris Sugg.)  It also gave us the opportunity to learn about the construction of these huge lanterns. 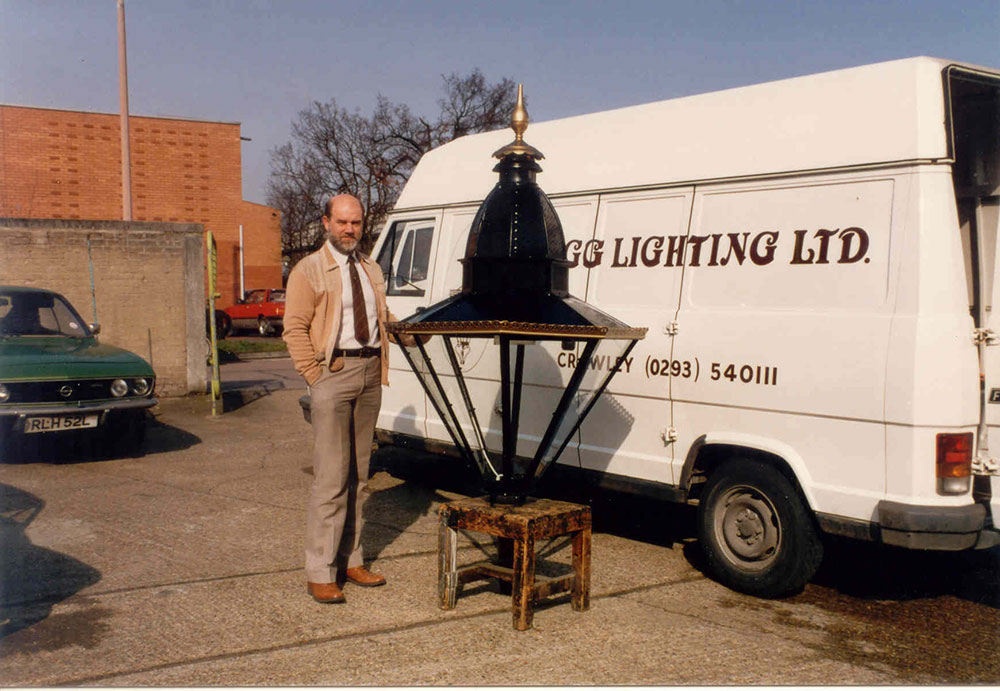